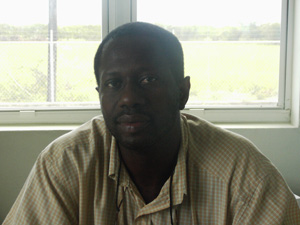 The hurricane season normally runs from June 1 to November 30 but sometimes varies depending weather patterns.

Carl Herbert, National Disaster Coordinator, advised the general public to not only focus on the word ‘hurricane’, but to be concerned about the general term ‘weather systems’.

Herbert said although tropical storm winds are not very strong, they can cause endangerment to persons’ lives.

“Quite often, tropical storms bring a lot of rain and rain can create landslides and flooding. We don’t want people to take tropical storms too lightly. A weather system can affect people in different ways. Our message is to be as prepared as you can during the hurricane season.”

Herbert said the Federation has never had a category 5 hurricane recorded.

He also said he do not want people to focus on storms’ categories alone, but to also pay attention to preparedness.

Herbert said over the years, measures have been implemented to cease using schools as shelters. He said the schools were not designed to accommodate individuals during a storm, although they have large spaces. Some of them don’t have kitchens and others have toilet facilities outside.

“We recognized this during Hurricane George for people were impacted and they had to shelter in schools because their homes were severely damaged. They couldn’t go back to their homes and so they had to occupy the schools. Children were at a disadvantage.

“We are focusing more on community or multi-purpose centers that government has built. Back in 2004, with the support of the World Bank, three community centers/ shelters were built. One center was built on St. Kitts and two on Nevis. They have sheltering capabilities built in. They have also worked closely with the churches and they allowed us to use their schoolrooms,” Herbert said.

Herbert informed the public that public sheltering should be the last resort.

“We want to encourage people to find a place in their homes or shelter by a neighbor or friend. It helps because quite often the hurricane could be a very traumatic experience. The company of others helps. We urge people who are considering public sheltering to make an early decision. We want people going to the shelters before the storm, not during. That is why it is useful to talk to a relative or friend or neighbor in case anything happens you can slip quickly over by them. We are also encouraging people who consider sheltering to walk with a snack because shelters are only holding areas.”

Herbert urged persons who have the duty of taking care of a senior citizen to discuss early with someone close to them about what they plan to do with the person.

He said for individuals who have vehicles, especially those living in downtown Basseterre, it would be best to avoid water-vulnerable places such as ghauts.

“If you have a garage, secure the vehicle in it. If you don’t have a garage, I suggest you may have a relative or friend who has a space in their yard where you can park it.”

The co-ordinator said normally people who have boats remove them from the sea or beaches and take them inland.

Herbert encouraged fishermen to discuss with the Fisheries Department the possibility of their boats being sheltered during a storm.

If persons are caught off guard and in a dangerous position while inside their homes during a storm, for example if the roof lifts off, he advised finding a space under the stairs if they live in a two-story house. He said a bathroom is also a relatively secure area because the windows tend to be small and have four good walls around. He also recommended a garage.

“Some people even use their cupboards and clothes closets. We also urge people to stay off the road because it won’t be a time to sight-see. Try to avoid going outside your house to see what’s happening. People need to have their transistor radios, flash-lights, water-proof containers, buckets with covers to store water for various purposes, tarpaulin and to secure their documents. Most likely electricity would be turned off as a precaution. People should pack a change of clothing with a snack so that you can move with the contents.”

Herbert also said people should listen to the radios for information and avoid using the telephones.

“Evidence seemed to show in several places around the World where some persons got injuries by the lightening seeping through the telephone system. Apart from that, you are also tying up the system.”

Herbert said shutters are the safest to use on a window, however persons who have glass windows should tape them up. He said tape helps to hold the glass together in case it shatters. He also said impact-resistant plastic windows are safe to use.

Herbert said over the years, there were no significant loss of life because of a hurricane on our islands.

Herbert said preparing for a hurricane should not only be a government affair, but also an individual affair.

He also warned persons to avoid storing bulky items such as chairs and refrigerators in the guts.

Herbert informed workers on the construction sites to be more sensitive towards the hurricane season and properly secure lose nails, boards etc.