MEXICO CITY (CNN)–  Andres Manuel Lopez Obrador has declared victory in Mexico’s presidential election, as preliminary results showed the leftist veteran politician, who had presented himself as an agent of change, secured a landslide win.

President-elect Lopez Obrador is estimated to have received over 53% of the vote, more than double the total of his closest rival, according to the country’s electoral commission.

“Today, they have recognized our victory,” Lopez Obrador, known by his initials AMLO, told a crowd of jubilant supporters at an event in Mexico City late Sunday local time.

President Enrique Peña Nieto called Lopez Obrador shortly beforehand to congratulate him and pledged to help him carry out an orderly transition. Lopez Obrador will formally take power on December 1. 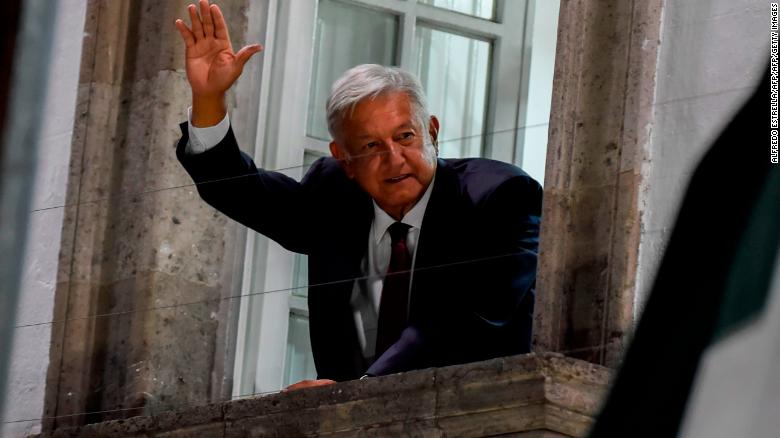 Andres Manuel Lopez Obrador waves to his supporters after an apparent victory in Mexico’s general election on July 1, 2018.

Lopez Obrador had dominated the polls in the run up to Sunday’s vote, at times holding a 20-point lead over his rivals. Within two hours of polls closing, three of his main rivals had conceded defeat.

In his speech to supporters, the President-elect said he would forge a new relationship with the US “rooted in mutual respect and in defense of our migrant countrymen who work and live honestly in that country.”

He added migration should be done by choice, not because of necessity, promising to “strengthen the internal market to try to produce in the country what we consume and so that Mexicans can work and be happy where they were born, where their family is, where their customs and their cultures are.” 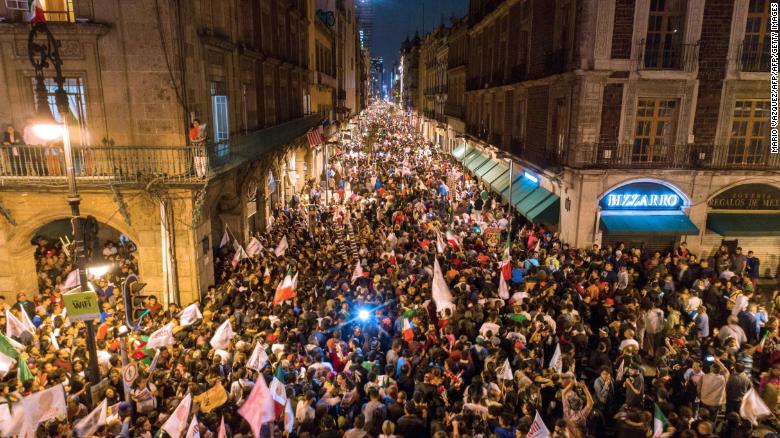 Supporters of Andres Manuel Lopez Obrador, celebrate at the Zocalo square in Mexico City, after getting the preliminary results of the general elections on July 2, 2018.

Lopez Obrador also promised to tackle violence and wipe out corruption, which he said was the “result of a political regime in decay.”

“We are absolutely certain that this evil is the principle cause of social inequality and of economic inequality,” he said. “Because of corruption, violence has erupted in our country.”

He added that he will pursue a peace plan with representatives of the United Nations, human rights and religious organizations, to help tackle the murder rate, which soared to an all-time high under Peña Nieto, whom critics accused of failing to adequately deal with crime, corruption and economic inequality.

US President Donald Trump congratulated AMLO in a tweet, saying he looked forward to working with him. “There is much to be done that will benefit both the United States and Mexico,” Trump said.

“I look forward to working closely with President-elect López Obrador, his administration and the Mexican Congress to build on the vibrant partnership between our two countries, create economic growth that works for everyone, and advance human rights and equality,” Trudeau said.

For many of the 89 million eligible Mexican voters, Sunday’s election was a referendum on the country’s political elite and its economic direction, as well as the tenure of President Enrique Peña Nieto, who was limited to a single six-year term.

Speaking to CNN in Mexico City, where supporters of AMLO thronged the streets into the early hours of Monday morning, voter Maria del Carmen Munoz said she supported Lopez Obrador during his previous two unsuccessful bids for the Presidency “and the third time (was) the charm.”

“I have supported him for so long because I believe in him, because the government we have is rotten,” she said. Our youth must have a leader to believe in. I am already older, but the young must have faith and hope in a President.”

Younger Mexicans, many of whom have grown up surrounded by rampant corruption and drug violence, were expected to have played a key role in choosing the country’s direction. Nearly 13 million voters between the ages of 18 and 23 were expected to vote for the first time, according to election officials.

Homicide rates soared to an all-time high under Peña Nieto, whom critics accused of failing to adequately deal with crime, corruption and economic inequality.

“He was the first to give universal pension to seniors, he created 16 high schools in marginal areas,” he said. “He created such seemingly insignificant things such a permanent driver licenses so that the government would not keep taking money from the people.”

Mexico’s new leader will have to contend with US President Donald Trump’s threats to pull out of the North American Free Trade Agreement and his calls for the construction of a border wall between the two countries, among other divisive talking points. Lopez Obrador told voters that he is the person for the job.

Lopez Obrador pushed back against plans for a border wall in a book he wrote titled “Oye Trump, or “Listen Trump.” He also pledged to propose to keep NAFTA.

He ran on a populist platform to break what he described as the grip that elites — or “power mafia” — have on Mexican society. He said he would lower the salaries of top officials and give those at the bottom a pay rise. He promised to sell the presidential planes and turn the presidential palace into a public park.

Even for a country numbed by escalating violence, the toll the campaign season in Mexico has exacted is horrifying.

In the nine months leading up to this weekend’s presidential election, 132 politicians have been killed. That’s according to Etellekt, a risk analysis and crisis management firm.

The group’s report, released Tuesday, found that 22 of Mexico’s 31 states have seen a political assassination since campaigning began in September.

Etellekt’s tally found 48 of the victims were candidates. The rest included party workers. “These numbers anticipates a serious challenge of security for peace and democratic governance in these regions, and could debilitate the political party,” the firm said.