Two bills will be introduced and have their first reading, while three bills will be have their second and third readings when the Nevis Island Assembly convenes in Chambers at Hamilton House at 10 a.m. on Tuesday, Nov. 19, it was announced Wednesday via the Order Paper from Ms. Myra Williams, Clerk of the assembly.

The Integrity in Public Life (Amendment) Bill, 2019 was introduced by Mr. Brantley, and had its first reading when the assembly met on Oct. 8.

The sitting will commence with the formal entry of Hon. Farrel Smithen, President of the Assembly, followed by Prayers; a Motion for the approval of the Order Paper as circulated; Messages from the Her Honour Hyleeta Liburd, Deputy Governor General of Nevis; Announcements by the President; Papers to be laid; Statements by Ministers; Personal Explanations; the Introduction of Bills and First Reading; Public Business where the bills will have their second and third readings; followed by the adjournment. 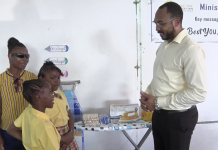