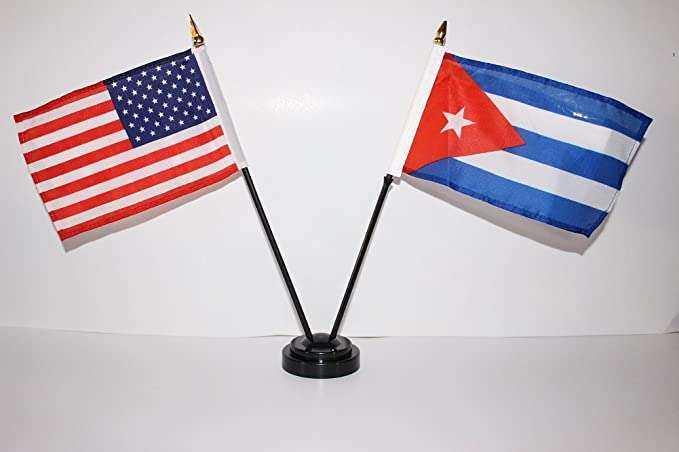 - Advertisement -
by Rafael Bernal
The Hill

NEW YORK – Cuba’s top diplomat said Tuesday his country’s officials have no choice but to engage the United States in negotiations to normalize relations, despite a decade of diplomatic whiplash and mixed messages from Washington.

In an interview with The Hill, Foreign Minister Bruno Rodríguez Parrilla responded to a question posed by former Obama administration adviser Ben Rhodes on whether Cuban officials would “ever, ever negotiate anything with America ever again after this?”

“We will have to,” said Rodríguez Parrilla, who was in New York to attend the United Nations General Assembly.

“We will have to, first, because there is a historical trend that will, at some point, force us to reestablish dialogue and lift the blockade.”

After a historic and controversial push to normalize relations between Washington and Havana under former President Obama, the Trump administration did an about-face, most famously adding Cuba to a list of state sponsors of terrorism.

The Biden administration, though less hawkish than the Trump administration, has not taken major steps to normalize relations, including keeping Cuba on the terrorism watchlist.

“We shouldn’t expect President Biden to return to the policies of President Obama. One would have expected President Biden to implement his own policy, adjusted to his electoral platform, to his commitments with his voters, to the current reality of the international situation,” said Rodríguez Parrilla.

“What has been a regrettable surprise is that President Biden continues to apply, precisely, the adverse, abusive, failed policies that do not bring the United States closer to any result [inherited from] President Trump, who is [Biden’s] political antipode,” he added.

Still, the Biden administration has softened some of its predecessor’s Cuba policies, often despite domestic political pressure.

“President Biden’s policy toward Cuba is rooted in supporting the Cuban people and protecting human rights. Our approach to Cuba, just like any other country, takes into account various current political, economic, and security factors. Over the past few years, conditions in Cuba and in the region have changed, and we have adapted our Cuba policy accordingly,” a National Security Council spokesperson told The Hill.

In May, Senate Foreign Relations Committee Chairman Sen. Bob Menendez (D-N.J.) panned a Biden administration announcement that some travel restrictions to the island were being lifted, while celebrating the resumption of the Cuban Family Reunification Parole program, which streamlines legal immigration for Cubans with family in the United States.

“I am dismayed to learn the Biden administration will begin authorizing group travel to Cuba through visits akin to tourism. To be clear, those who still believe that increasing travel will breed democracy in Cuba are simply in a state of denial. For decades, the world has been traveling to Cuba and nothing has changed,” said Menendez, the highest-ranking Cuban American in the history of the United States Congress.

The Biden administration has also announced that the U.S. consulate in Havana will resume processing migrant visas in 2023, and in May, it announced eased restrictions on remittances — money sent by U.S. residents to friends and relatives on the island.

“I think it was positive, that announcement in May by the current U.S. government to reestablish the regular flow of remittances,” said Rodríguez Parrilla.

“However, that announcement has not materialized into a concrete decision, and it’s still not happening. One ought to wonder why,” he added.

A representatives for the White House did not respond to a request for comment on this story.

The foreign minister was in Washington in 2015 to reopen the Cuban Embassy, one of the greater symbolic gestures of the rapprochement period during the Obama administration.

While those milestones seem frozen in the past for now, Cuba and the United States collaborate on a series of important, if technical, matters.

For instance, Cuba quickly opened its airports to flights stranded in the air during the 9/11 terrorist attacks, the island has often allowed U.S. military storm-chaser aircraft to enter its airspace for hurricane research and the United States provided technical assistance to clean up after a fire at a Matanzas oil supertanker installation in August.

“There is a cooperation agreement on environmental issues including search and rescue, common waters, that passed a test of adversity with the previous Republican government, but that remains in effect,” said Rodríguez Parrilla.

Part of this collaboration is due to proximity and shared crises — Hurricane Ian hit Cuba’s western provinces before picking up steam in the northern Gulf of Mexico and hitting Florida Wednesday.

“It’s a very intense relationship. There is a deep cultural connection between the two neighboring countries, there is also a shared history. However, there are deep and totally asymmetrical differences,” said Rodríguez Parrilla.

“U.S. government policy, historically, since 1959, has been one of hostility and aggression. Its core element is the economic, commercial and financial blockade, which is the factor that decides the quality of the bilateral relationship,” he added.

While the Cuban embargo is a unilateral U.S. policy, various domestic and international pressures feed into U.S. hostility toward the Cuban communist regime.

First and foremost, the core of the Cuban diaspora in the United States is composed of people who fled the 1959 revolution and their descendants.

Three decades of Cuban alignment with the Soviet Union solidified a sense of enmity and incompatibility, building once seemingly insurmountable political barriers against rapprochement within the United States.

Cuba also maintains core elements of Soviet-style communism — including a politburo of which Rodríguez Parrilla is a member — though its dynamic political system is far more open than the top-down autocracies of other extant communist regimes, like North Korea.

And the island’s human rights record has been panned by actors throughout the political spectrum, including left-leaning groups like Human Rights Watch, which last year condemned repression against demonstrators who were largely protesting economic conditions.

Still, Cuba’s flawed human rights record is not exclusively one of repression.

On Sunday, Cuba held an open referendum for citizens to vote on a series of social reforms, including same-sex marriage and gender equality measures.

The proposal was overwhelmingly approved, with nearly 4 million votes in favor, and nearly 2 million against. The results showed both a split with conservative attitudes associated with the old guard and a diversity of opinion on a major social issue.

“Tell me of any [other] country that decided these topics by referendum,” said Rodríguez Parrilla, in reference to countries like the United States, Mexico and Colombia, where controversial but widely accepted social issues like same-sex marriage have been left to the courts.

“And regardless, there are other countries, that through votes that sometimes inevitably are perceived as partisan, through the courts, they determine what citizens should democratically determine directly by themselves, without mediators, as is the case with sexual and reproductive rights.”

“Make the comparison … between the decision of the U.S. Supreme Court on abortion, and submitting to popular referendum everything related to that topic and others,” said Rodríguez Parrilla.

The Cuban diplomat’s understanding of how the country’s referendum on social issues compares to the debate over abortion rights in the United States is a feature of a political class that has carefully studied U.S. politics for decades.

Cuban officials feel that’s an advantage they have over their U.S. counterparts, who they say often caricaturize a complex political system as a monolithic old-style communist regime.

“With all due respect, the United States government is not at all a studious being,” said Rodríguez Parrilla.

“The criteria that have been put forward by one side and the other on U.S. democracy in the last two years are very peculiar,” he said.

Still, Cuba’s stability is more in question today than at any time since at least the end of the Cold War, as internal and external economic and political difficulties pile on for the island.

U.S. hawks see an opportunity to further push the 60-year-old embargo in the hopes that it will finally achieve a collapse of a recalcitrant communist system; doves see a risk of creating an unnecessary humanitarian crisis in a country that’s shown some openness to reform.

Cuban officials say the ball to reopen talks is in the U.S. court.

“We have that willingness. No doubt the U.S. government will have to show a similar willingness. And in the end we’ll have to judge based on tangible acts,” said Rodríguez Parrilla.

“But it already happened. It already happened once, which proves it’s possible. And it proved that it was beneficial. I am sure the historical trend leads to that — a policy that’s failed for 60 years has to be changed,” he added.