Civil’s attorney, Reynold Georges, called his client’s arrest politically motivated. It wasn’t immediately clear if Civil had been charged with anything.

The arrest comes as more than 1,000 demonstrators gathered around one of Haiti’s most notorious gang leaders to commemorate Moïse. The crowd was mostly dressed in white as they cheered on Jimmy Cherizier, a former police officer who now leads “G9,” a federation of nine gangs that officials have blamed for a spike in violence and kidnappings in recent months.

“Everyone needs to wait on my order before we respond to the killing of Jovenel Moïse,” said Cherizier, who goes by the name of “Barbecue” and whom police say is behind several

He was wearing a white suit and black tie as he spoke to the crowd at the seaside slum of La Saline in the capital of Port-au-Prince. A nearby truck played music as Cherizier knelt down before a large portrait of Moïse and began to light candles.

Earlier, the crowd sang as they made a circle around a bonfire and threw salt into it as part of a ceremony to honor Moïse. Many had their faces covered so as not to be identified.

Moïse was shot several times during a July 7 attack in which his wife was seriously injured. At least 26 people have been arrested, including 18 former Colombian soldiers. Police are still looking for various suspects, including a former rebel leader and an ex-Haitian senator. On Monday, they identified another suspect: Haiti Superior Court Judge Windelle Coq Thelot. 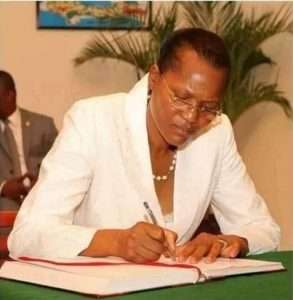 Authorities in Haiti have issued an arrest warrant on murder charges for Judge Windelle Coq-Thélot, a former Supreme Court judge, in relation to the assassination of President Jovenel Moïse. Coq-Thélot was among about two dozen people that Moïse said tried to overthrow him last February 7 amid disputes over when his term’s end date.

On July 25, BedFord Claude, the government commissioner at the Court of First Instance in Port-au-Prince, issued the warrant for murder and armed robbery in connection with the July 7 slaying, according to court records and a Haitian National Police (PNH) search notice.

Police said Coq-Thélot is “dangerous and armed” and have urged anyone with information about her whereabouts to contact PNH at +509-3834-1111.

Coq-Thélot is a former judge at La Cour de Cassation, Haiti’s highest court. Originally from Marmelade, a town in the Artibonite region, she spent more than a decade at the Court of Appeal in Gonaives and Port-au-Prince and rose to become deputy commissioner at the Port-au-Prince Court of Appeal. In 2011, she was promoted to associate justice at the nation’s highest court.

In February, Coq-Thélot was among a group of at least 23 people that Moïse said attempted to kill him and overthrow the government in a dispute over when his term ends. She was one of three Supreme Court members chosen by the political opposition to replace Moïse at the time.

Moïse then issued a February 8 decree that forced Coq-Thélot and the other two judges to retire. Judge René Sylvestre then became the chief justice over the Supreme Court, a role that is in the line of succession if the president cannot function. Sylvestre died of Covid-19 in June, leaving the role vacant at the time of Moïse’s heinous killing.