I find it strange that Arthur Gilbert has decided to erect a 100 foot tower, first directly in front of my house which is adjacent to the Bellevue Primary School and secondly, since he had to abandon that first location, he has begun construction now in front of the TBN satellite-dish array. The first location was abandoned after my neighbours and I objected to the construction of this 100 foot tower primarily for fear of dangerous radiation that would be produced by equipment mounted on the tower and of course because it is something we do not wish to have to look at every day.

We were successful in stopping the tower from being built at that first location. Last week we noticed that the tower construction had been moved to property adjacent to the government’s new low income housing development. Mrs. Huggins-Whitney sold the property to my father with restrictive covenants in place to ensure the land was used strictly to erect dwelling houses and that no commercial building or activity would be carried out on the property in an effort to protect the residents and preserve the peace and quiet in our area.

The restrictive covenants placed on the title of the property are essentially law. To not abide by the covenants on the title is to break the law. How can the government encourage law breaking? Doesn’t this set a precedent for all covenants put in place on other titles? If this is allowed to go through then no covenant in the federation is valid! This has been brought to the attention of the government and still nothing has been done. Do our voices and concerns not count? Does our safety not count? Do the restrictive covenants placed on the title simply not matter? This is something that I could have never imagined to take place or be permitted in Nevis and I am shocked at the attitude of the Nevis government concerning this matter.

There are far more suitable locations for this tower for example over in the Long Point area where there are many commercial structures. Why cause us grief? We do not want to be exposed to radiation that can cause cancer and still have to look at that ugly 100 foot tower every day. This is Nevis, we have made this area our home and we want to protect ourselves, our neighbourhood and our environment. Even the Governor General who lives opposite the tower site has expressed his deep concerns over the tower construction. Last night a backhoe and a number of trucks were in operation hauling stones from the tower site from 7pm until after 1030pm. They have no regard for people who live here including those who were trying to sleep.

I understand that legal proceedings have been initiated to have the law enforced and the tower removed based on the restrictive covenants. However I encourage other members of my neighbourhood and indeed the citizens of this island to write to the editor of the newspapers and voice their concerns when matters like this arise. I also encourage persons to take a stand even if it means taking the matter to court. It seems if we the people do nothing we risk losing everything. These are some serious times. Quite frankly things are happening in Nevis and I feel the people really need to take a stand as the consequences of silence and no action are immense. 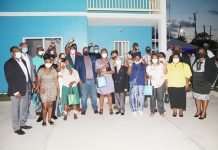