Travel: Sherlock Holmes – Death by stroke of a pen, resurrection by public demand

MEIRINGEN, Switzerland – Ask practically anyone if he or she has heard of Sherlock Holmes, and the response is immediate. Of course! The famous English detective with the pipe and that funny hat.

But just how many of his fans are actually aware that Holmes, in fact, never existed? Or that he was only a product of someone’s brilliantly crafted imagination?

The answer is that most know that he’s a fictional character (although many also admit that they’re not 100 percent sure). But for those who’ve never actually read a hard copy of Sir Arthur Conan Doyle’s works, the reaction is often “what do you mean?”

Even more amazing, many have never even heard of Conan Doyle. The fact is, the very character Doyle invented for his first published Sherlock Holmes story, A Study in Scarlet, took on a life of its own. (Even more so after the advent of movies and television, in which Holmes was played by the legendary actor Basil Rathbone). So much so that it eventually went on to overshadow its own creator. And nowhere is this more evident than in the picturesque Swiss Alpine village of Meiringen.

By the latter part of the 19th century, Meiringen and its dramatic snow-capped surroundings had already become a popular holiday destination for elite travelers, especially members of the English gentry. In those days, when airplanes and bargain package tours to faraway places (meaning anywhere beyond the White Cliffs of Dover) didn’t yet exist, leaving one’s own shores for a foreign holiday was a considerable undertaking, largely restricted to a wealthy minority who had the spare time and means to do so. In fact, so many English came to Meiringen that one of Switzerland’s first Anglican churches was built there in order to accommodate their religious needs – highly unusual in a majority Catholic region of Switzerland

In 1893, one of the village’s visitors was Dr. Arthur Conan Doyle, who’d served as a physician aboard a whaling ship in the Arctic – and later on a derelict vessel plying between Liverpool and the west coast of Africa – before eventually returning to England and setting up his own medical practice in Portsmouth, on the south coast of England.

But from early on, Conan Doyle had realized that his true passion in life didn’t rely on a stethoscope, but on a pen and an elaborately detailed imagination. In this, he’d managed, through sheer determination and plain hard work, to succeed beyond his wildest dreams.

But he was far from satisfied. Although he would write several other works-including a futuristic science fiction novel, The Lost World, as well as stage plays, poems, and, later in life, studies of spiritualism and the occult – to this day, no other works have embodied his legacy like his Sherlock Holmes stories. But ironically, the detective with the pipe and funny hat was his least favorite literary creation.

On this occasion, Conan Doyle had come to Meiringen on what would turn out to be a dark and secret mission: to end Sherlock Holmes’ career-and life-once and for all. As far as he was concerned, there were far more important and intellectually stimulating things to write about rather than wasting his time on what he’d always considered nothing more than a commercial venture.

Never mind that Holmes and Dr. Watson had handsomely rewarded him many times over; he’d simply become bored with the whole thing and wanted to move on. And Meiringen, he’d decided, was where it would happen. In the story he was about to write, The Final Problem, Holmes would have his last encounter with his arch enemy, Professor James Moriarty, under the Reichenbach Falls. And both would perish. At least, that was Conan Doyle’s hope.

But that was not to be. When The Final Problem was published a few months later and Holmes’ fans learned that their favorite detective was no more, they were outraged. So much so that more than 20,000 Strand Magazine readers abruptly cancelled their subscriptions in protest.

However, it wasn’t until 1903 that Conan Doyle finally succumbed to public pressure and decided to bring Holmes back from the dead with The Return of Sherlock Holmes. This was followed by more stories, including one of his most famous, Hound of the Baskervilles,  and, in 1928, the best seller of all, a collection of many of his previous works, The Casebook of Sherlock Holmes.

During the years, Sherlock Holmes fans around the world have also taken it upon themselves to immortalize Conan Doyle’s characters, many in surprisingly inventive ways. Not just at the famous Sherlock Holmes Museum at London’s 221B Baker Street, but also, on a smaller, but no less elaborate scale, in this small Swiss village. 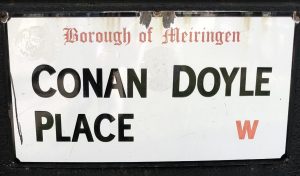 And, just in case there were any remaining doubts as to Sherlock Holmes’ popularity, there’s even a brass statue of him near Meiringen’s village square. In fact, during the busy summer months, the statue itself is often hidden behind surging crowds (especially Japanese and Chinese visitors) intent on taking selfies in the company of the famous detective. There can even be a 30 minute-long waiting line.

But, at least for me, the most fascinating event in Meiringen turned out to be a visit to the Sherlock Holmes Museum. Located in the basement of the Anglican church, it features an amazing replica behind plate glass windows of the lodgings shared by Holmes and Dr. Watson on London’s Baker Street.

Not even the slightest detail has been overlooked, including Holmes’ violin and his open tobacco pouch.

The last part of my visit was to the Reichenbach waterfall, Conan Doyle’s choice for the backdrop to the final confrontation between Holmes and Dr. Moriarty. Located about three miles from the village, the falls can be reached by a restored wooden railway carriage, originally built in 1899, which is pulled up 244 meters (about 732 feet) by cable. (A word of caution: definitely not recommended for anyone suffering from vertigo!)

Just as you’d expect in a Conan Doyle scenario, the Reichenbach Falls are nothing short of dramatic. With an almost vertical drop of 140 meters (420 feet), they nevertheless give the onlooker an impression of being much higher. For anyone standing on the viewing platform, even when there’s no wind, it’s difficult to avoid being soaked by spray. And as far as holding a conversation with your neighbor, forget it; the intense roar will make that practically impossible.

At least for now. You’ve earned that break.