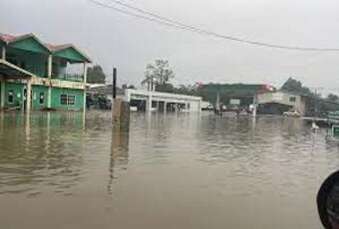 BELMOPAN, Belize (CMC) – Belize came under heavy rains and strong winds linked to the passage of a tropical wave which resulted in widespread flooding and the closure of schools in two districts on Monday.

The country’s Ministry of Education, Culture, Science and Technology said that based on the recommendation of the National Emergency Management Organization (NEMO) and the National Meteorological Service (NMS), it had taken the decision that “all class sessions in the Corozal and Orange Walk Districts have been cancelled for today” and that schools in the other districts where flooding is being experienced are being asked to advise the authorities on the situation.

“The Ministry will continue to closely monitor all other districts for developments and will inform the public of any changes made to the school schedule. We urge everyone to pay keen attention to the advisories issued by the NEMO and the NMS, and to take all necessary precautions to safeguard health and lives,” the Ministry said.

NMS said that some areas in the Orange Walk and Corozal districts received as much as five inches of rainfall during the past 48 hours and that the tropical wave will continue to support very wet conditions persisting at least through to mid-week.

“Heavy showers and thunderstorms are expected over most areas of the country producing daily rainfall totals of one to three inches with locally higher amounts. A flood watch remains in effect in keeping with the flood advisories issued for areas prone to flooding as the weather is expected to get worse in the coming days,” the NMS reported.

NEMO said shelters have been opened in the villages of Carmelita and San Jose in the Orange Walk District and that people living near rivers, creeks, and low-lying areas are cautioned to be on the alert and take the necessary actions to save lives, including moving to safer areas.