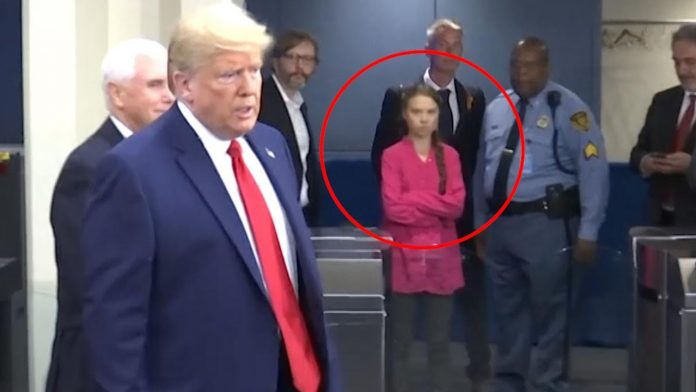 The US leader shared a video of the 16-year-old’s emotional address to a United Nations summit – while the climate change activist had been filmed scowling at Mr Trump as he passed her at the event on Monday.

Mr Trump took aim at the youngster as he wrote alongside the footage: “She seems like a very happy young girl looking forward to a bright and wonderful future. So nice to see!”

Miss Thunberg had told governments: “You are still not mature enough to tell it like it is. You are failing us. But the young people are starting to understand your betrayal.”

She added: “You have stolen my dreams and my childhood with your empty words,” she said.

“The eyes of all future generations are upon you. And if you choose to fail us I say we will never forgive you. We will not let you get away with this. Right here, right now is where we draw the line.”

As Mr Trump passed in front of Miss Thunberg at the summit, she fixed him with a steady stare and then scowled.

Julián Castro, the Democratic presidential contender, tweeted the footage showing the way she looked at the US leader, alongside the words: “I think a lot of us can relate.”

When Miss Thunberg arrived in New York last month, she said she had little hope she would be able to convince the president to take action over the climate emergency.

“I say ‘listen to the science’ and he [Mr Trump] obviously does not do that. If no-one has been able to convince him about the climate crisis and the urgency, why would I be able to?” she said.

Mr Trump risked slowing the diplomatic and policy momentum behind a global response to combatting climate change when he announced his decision to pull out of the 2015 Paris accord.

The US leader rolled back Barack Obama administration’s regulations on greenhouse gas limits for cars, trucks and power plants, and pushed the nation to burn more coal.

Swedish climate activist Greta Thunberg and 15 other children filed a complaint with the United Nations Monday alleging that five of the world’s major economies have violated their human rights by not taking adequate action to stop the unfolding climate crisis.

The complaint was filed a short time after Thunberg delivered an impassioned rebuke to world leaders at the UN Climate Action Summit.
“You have stolen my dreams and my childhood with your empty words — and yet, I’m one of the lucky ones,” Thunberg said Monday. “People are suffering, people are dying.”
The petition names five countries — Germany, France, Brazil, Argentina and Turkey — which they say have failed to uphold their obligations under the Convention on the Rights of the Child, a 30-year-old human rights treaty which is the most widely ratified in history.
The filing comes as the United Nations hosts a Climate Action Summit on the first day of its General Assembly, where dozens of world leaders are unveiling plans for reducing their countries’ carbon footprints.
At a press conference across the street from the summit, Thunberg and the other children joining the petition expressed their blunt frustration with the lack of urgency that world leaders have shown in fighting climate change.
“The message that we want to send is that we’ve had enough,” Thunberg said.
Carl Smith, a member of the indigenous Yupiaq tribe who lives in Akiak, Alaska, explained how warming has imperiled the subsistence hunting and fishing that his community depends on.
He blamed the inaction from leaders on greed.
“I think they’re acting slowly because they don’t want to lose money,” Smith said. “And I think they should go see what [climate change] is doing to little villages and cities.” 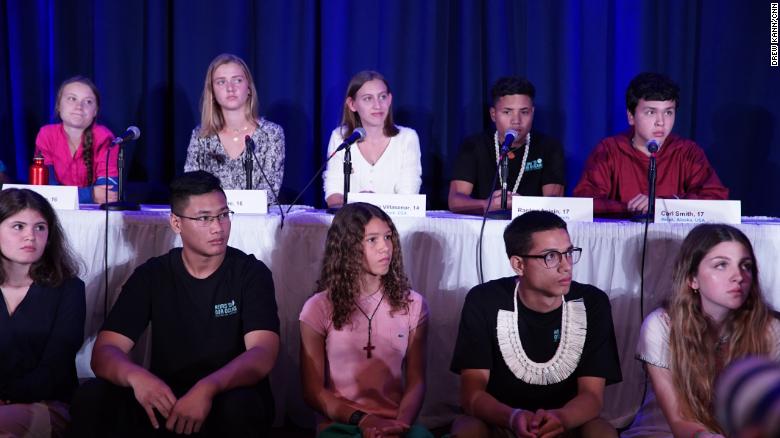 Youth climate activist Greta Thunberg and several other children announce the human rights complaint filed over five countries’ handling of the climate crisis.
In their filing, the children — who hail from 12 different nations — detail how they say their human rights have been violated.
They charge that the countries have not used their resources “to prevent the deadly and foreseeable consequences” of the current climate crisis, or cooperated effectively with other nations to address the problem.
They also call out each of the countries for their “inadequate” pledges to reduce greenhouse gases, saying that the cuts they have agreed to will not keep global temperatures from rising less than 2 degrees Celsius, the goal that was set by the 2015 Paris Climate Agreement. Scientists have warned that global warming of 2 degrees Celsius will result in more frequent and dangerous heat waves, rising sea levels and declining crop yields around the world.
The children also say that their lives have already been impacted by the climate crisis, and that their future livelihoods will be endangered as the impacts worsen.
The children do not ask for any monetary compensation. Instead, they ask that the countries immediately adjust their climate goals and work with other nations to address the crisis.
The complaint singles out those countries because they are among the 44 that have accepted the convention’s jurisdiction to hear complaints against them. They are also five of the world’s biggest historical and current emitters of greenhouse gases, which are causing the planet to warm and triggering a host of other alarming impacts, from raising sea levels to producing more intense storms. 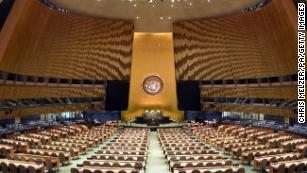 More than 90 heads of state are descending on New York City. Here’s what to watch for

Some of the world’s other top greenhouse gas emitters are notably not named in the complaint.
The United States — which has contributed more global warming-inducing carbon dioxide to the atmosphere than any other country — cannot be held in violation because it has not ratified the part of the treaty that allows children to seek justice for potential violations.
And China, which currently emits more greenhouse gases than any other country, has also not signed onto that portion of the treaty.
- Advertisement -