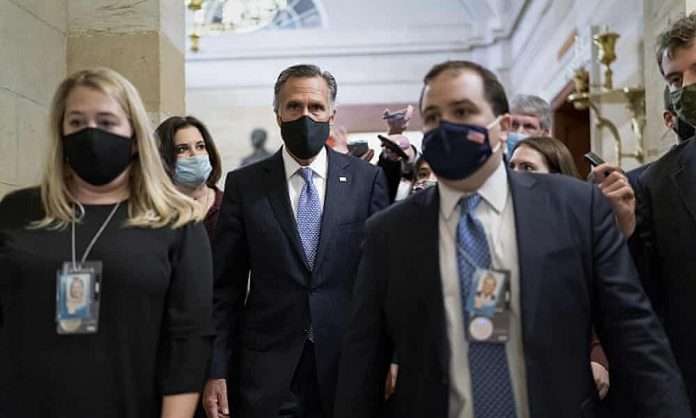 Lauren Gambino in Washington and Sam Levine in New Yo

Guardian (UK) Democrats revealed disturbing new recordings of the mob attack on the US Capitol last month as they presented their case on Wednesday in the historic second impeachment trial of Donald Trump.

House impeachment managers constructed a timeline which they said showed that the former president was “singularly responsible” for the deadly assault, which brought a violent mob within footsteps of the nation’s political leaders.

Senators, seated as jurors in the chamber that was the scene of the invasion on 6 January, watched silently as the security videos and police dispatches painted a fuller picture of the afternoon. 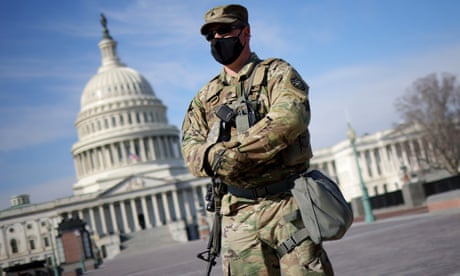 The dramatic scenes showed rioters rampaging through the halls of Congress, searching for the then-vice-president Mike Pence and the House speaker Nancy Pelosi. Members of far-right extremist groups were among the first to enter the Capitol. Some wore tactical gear, others were armed.

In previously unreleased security footage, Pence, who had been presiding over a session to certify Biden’s victory, and his family were seen being evacuated from a room near the Senate chamber, nearly 15 minutes after rioters breached the Capitol. Chants of “hang Mike Pence” reverberated through the marbled building, while outside other constructed a makeshift gallows. At one point, the mob came within 100ft of the room where Pence was sheltering, the managers said.

One graphic video showed police shooting through a broken window, killing Ashli Babbitt, as she attempted to enter the building. A number of senators were visibly upset by a video of police officer Daniel Hodges crushed in a doorway as he tried to prevent the rioters from breaching the Capitol.

The Capitol police officer Eugene Goodman was seen in another extraordinary video leading Senator Mitt Romney away from the rioters, potentially saving his life. In another recording, senators are rushed from the building, narrowly missing the insurrections by just “58 steps”.

Romney, one of Trump’s most frequent Republican critics, told reporters he had no idea he has been so close to danger: “It tears at your heart and brings tears to your eyes. That was overwhelmingly distressing and emotional.”

In another security video, Pelosi’s staffers rushed into her office and barricaded themselves in a room, moments before the rioters arrive. The staffers could hear them calling menacingly for the speaker as they marauded through her office. One of the men who posed for a photo of himself with his boots atop Pelosi’s desk was carrying a stun gun that could have caused serious harm if it had been used, the managers said.

“President Trump put a target on their backs,” Stacey Plaskett, an impeachment manager and a delegate of the Virgin Islands, said. “And his mob broke into the Capitol to hunt them down.”

The House Democrats – called impeachment managers during the trial – methodically traced Trump’s months-long campaign to overturn his election defeat to argue that the former president was not an “innocent bystander” swept up in the mayhem of 6 January, but the “inciter in chief”.

The impeachment managers used their first full day of arguments to make the case that the Capitol invasion was not a random act of chaos, but one “assembled, inflamed and incited” by Trump over the course of several months.

In previously unseen security footage, they argued, Trump violated his presidential oath of office by not acting to stop the violence, claiming that he instead watched with “glee” as his supporters stormed the seat of American government. Five people died.

“To us it may have felt like chaos and madness, but there was method to the madness that day,” said congressman Jamie Raskin, the lead impeachment manager.

Managers weaved their reconstruction of the afternoon with chilling dispatches from the Metropolitan police department. In one unreleased audio recording, an officer frantically calls for assistance after insurrectionists charged past the barricades toward the Capitol.

At 13.49, the responding officer declared the violence to be a riot. Then later, in another exchange, an officer shouts repeatedly: “We lost the line. All MPD pull back.”

The presentation appealed to the senators’ still-raw emotions from the day. During a break, several members said they were shaken and shocked anew by the records. Even so, it remains extremely unlikely that the managers will persuade 17 Republican senators to join all Democrats in finding Trump guilty of high crimes and misdemeanors. If convicted, the Senate could vote to bar Trump from ever again holding elected office.

Congressman Joe Neguse, another impeachment manager, dissected Trump’s speech during a 6 January rally, making the case that Trump intended to rile up supporters there to attack the Capitol as electoral votes were being counted and for his supporters to prevent Congress from certifying Trump’s loss.

He noted Trump publicly invited supporters to Washington on that specific day and planned the rally at the exact time Congress was meeting to count electoral votes. When Trump spoke, Neguse said, he encouraged them to “fight” – language that unmistakably signaled to them to attack.

“Those words were carefully chosen. They had a specific meaning to that crowd,” Neguse said. “He didn’t just tell them to fight like hell. He told them how, where and when. He made sure they had advance notice.” 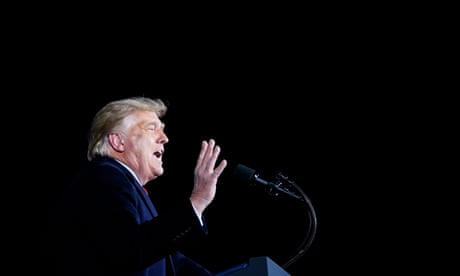 Democrats pointed to months of false statements Trump made about the election being stolen leading up to 6 January. Those lies, they said, represented a deliberate effort to sow distrust of the election that exploded in the attack on the Capitol. They played clips of television interviews and speeches in which Trump repeatedly refused to commit to accepting a peaceful transition of power.

“He built this mob over many months with repeated messaging until they believed that they had been robbed of their votesaid congressman Eric Swalwell of California, another impeachment manager. The impeachment managers played video of Trump claiming as early as May that the only way he would lose the 2020 election was if it was stolen.

When it was clear Trump had lost the election, his team turned to the courts. All but one of the 62 legal challenges were defeated or dismissed. Trump then ramped up his pressure on election officials to overturn the election results, publicly berating them when they refused. Senators heard audio of Trump’s conversation with the Georgia secretary of state, during which he implored him to “find” enough votes to reverse Biden’s victory in the state.

“Senators, we must not become numb to this,” said Pennsylvania congresswoman Madeleine Dean, an impeachment manger. “Trump did this in state after state so often, so loudly and so publicly.”

Perhaps worst of all, the managers said, was that Trump did nothing to discourage the insurrectionists who were causing violence and destruction in his name. They highlighted pleas from Republicans and former White House officials for Trump to condemn the violence and encourage his supporters to go home.

Trump was impeached while still in office by the US House of Representatives on one charge of “incitement of insurrection”. His lawyers have argued that his rhetoric constituted political speech, which is protected under the first amendment.

Raskin, a former constitutional law professor, rebutted the defense on Wednesday, arguing that while an ordinary citizen’s anti-government speech is protected by the first amendment, Trump had an obligation to protect the nation as its president.

Over the course of their eight-hour presentation on Wednesday, the managers also spoke personally and poignantly about the attack, reliving their own experiences that day. Visibly shaken, Dean recalled hearing a “terrifying banging on the House chamber doors”, while Swalwell, unsure of whether he would survive the afternoon, texted his wife: “I love you and the babies.”

Neguse, the son of immigrants from Eritrea, told his father that the proudest moment of his two years in Congress was returning to the House floor after the violence to finish the work of certifying the election.

Concluding their arguments for the day, impeachment manager Joaquin Castro, a congressman from Texas, revisited that moment on the evening of 6 January when he and his colleagues, still shaken from the violence, came back to the Capitol to “ensure that the will of the American people finally prevailed”.

“President Trump, too, took an oath as president,” he said. “He swore on a Bible to preserve, protect, and defend. And who among us can honestly say they believe that he upheld that oath? And who among us will let utter dereliction of duty stand?”