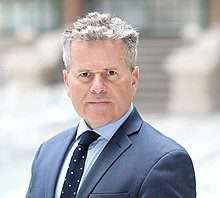 “It remains ongoing, and it will not stop, unless we stop it,” Dankin told the House of Assembly as he made reference to the surge in gang violence on the island.

The governor made reference to a recent attack in Long Bay against persons who were allegedly associated with local drug dealers, where an innocent visitor from the United States was killed.

A Police Tactical Unit, on patrol, intercepted the assailants. He said the police vehicle was hit by multiple strikes from high-velocity rounds.

“How an officer was not killed is remarkable. Our tactical unit returned fire and while it is still to be confirmed, and I may need to revise this, we believe one of the deceased, whose body was dropped in Dockyard by his fellow gang members, had been shot in the forehead as a result of our officers returning accurate fire under extraordinary pressure,” he said, giving a background to the surge in criminal activity.

“The other, a Haitian gang leader, who the police had made four separate attempts to arrest in the shanty areas of ‘Romy Yard,’ was killed by one of his own gang members before he could be arrested.”

The governor said the vacuum and confusion this created, allowed a predominantly Jamaican gang with a relatively small footprint to reinforce from Jamaica.

“They had anyway been seeking to kill one of their local rivals,” Dankin said, reminding legislators of the three days of shooting in Five Cays during April as this initial feud played out.

“Using military grade high velocity weaponry, the vast majority of the murders in September have been targeted and linked to this enlarged and now emboldened gang trying to remove who they believe are the local drug and arms smuggling competition. Those local criminals, already established here, are fighting back.”

He said while not everyone killed has been involved in criminality, many who have been murdered have been linked to criminality and a spiral of reprisal killings, including to avenge some innocent as well as criminal victims, has been the result.

Nigel John Dakin said the authorities have been focusing on bringing in immediate help to support the commissioner and his force.

He said firearms specialists from the UK arrived on Sunday and are already at work “with our Tactical Firearms Unit and those who help respond.

He said following the visit of Premier Charles Washington Misick to Jamaica, the Jamaican Cabinet is meeting on Monday “and we hope for support from them, as well.

He said he has also been working with the UK Ministry of Justice to bring experienced prosecutors to the island to further reinforce the DPP’s Office. Rapid access to UK forensic laboratories is also being arranged.