Members of a police patrol apprehended two boys, one 16 and the other 14, with a quantity of stolen articles in Mattingley Heights last week Thursday.

Acting Deputy Commissioner Joseph Richardson said that while patrolling in the Mattingley Heights area around mid-day last week Thursday, police arrested two juveniles who were in possession of a quantity of articles suspected to be stolen from homes within Basseterre.

Richardson said the stolen articles included jewellery; perfume; a cellular phone; a quantity of local and foreign currency including US and Guyana; and pieces of clothing.

“Investigations linked the items to three break-ins in the Mattingley Heights and Amory Drive areas and one of the perpetrators is a former resident of the Save Our Sons Boys Home (SOSBH) in Sandy Point,” Richardson said.

He noted that the elder of the two boys was discharged from the home on Saturday, October 22.

Both of them were charged but the 14-year-old was bailed last Wednesday with two sureties, while the other one is still in police custody. They are scheduled to appear in court next Monday.

Speaking with the leader of the Unique Touch Christian Centre and founder of the SOSBH, Pastor Clive Saunders, The Observer learned that the elder of the two boys charged was sent away from the home to Her Majesty’s Prison because of his indisciplined behaviour.

Pastor Saunders said he was the eldest among the members and had a great influence on the others, which did not augur well for code and conduct and violated standing orders of the institution.

“Unlike the three younger members who are at school, through the efforts of our organisation, he was employed at Harowe Servo Controls (St. Kitts) Limited in Sandy Point but left the job after one week, Saunders said.”

He added that on investigation for the reason of him leaving the job, the juvenile claimed he walked off the job because he was not comfortable working there.

“I subsequently took him back and learned from the manager that the young man never told or indicated to her that he was displeased over something or the other at the company. She however took him back in her employ but he again walked off on the same day,” Saunders said.

Pastor indicated that he had no other choice but to have the juvenile returned to Her Majesty’s Prison.

The Unique Touch Christian Centre, in collaboration with the St. Kitts Government, amidst some degree of controversy, launched the SOSBH earlier this year with the aim of rehabilitating and providing a home for juvenile delinquents who ran afoul of the law and were placed in Her Majesty’s Prison for safe-keeping.

Pastor Saunders noted that despite the fact that the project commenced with five juveniles and now there are only three, the organisation was slowly but surely achieving its objective.

He added that the current members were demonstrating a high sense of respect for those person who overlook them and they also showed the determination, in their attitude, to inculcate the behaviour of true reformers.

“We have a long way to go and a 1,000 miles begin with the first step but by the grace of God and the assistance of concerned citizens as well as the Government, we will perseverance and make this project a success,” Saunders said. 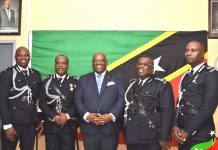