CIUDAD ACUNA, Mexico, Sept 18 (Reuters) – U.S. authorities moved some 2,000 people to other immigration processing stations on Friday from a Texas border town that has been overwhelmed by an influx of Haitian and other migrants, the Department of Homeland Security said on Saturday.

Such transfers will continue “in order to ensure that irregular migrants are swiftly taken into custody, processed, and removed from the United States consistent with our laws and policy,” DHS said in a statement.

While some migrants seeking jobs and safety have been making their way to the United States for weeks or months, it is only in recent days that the number converging on Del Rio, Texas, has drawn widespread attention, posing a humanitarian and political challenge for the Biden administration.

DHS said that in response to the migrants sheltering in increasingly poor conditions under the Del Rio International Bridge that connects the Texas city with Ciudad Acuna in Mexico, it was accelerating flights to Haiti and other destinations within the next 72 hours.

DHS added it was working with nations where the migrants began their journeys – for many of the Haitians, countries such as Brazil and Chile – to accept returned migrants. Officials on both sides of the border said most of the migrants were Haitians.

Haitian Prime Minister Ariel Henry expressed solidarity with the mass of migrants at the border in a series of posts on social media late on Saturday, saying “arrangements have already been made” to warmly receive those who return to the Caribbean nation.

“I share their suffering and say to them welcome home,” he wrote.

U.S. Customs and Border Protection was sending 400 additional agents to the Del Rio sector in the coming days, DHS said, after the border agency said on Friday that due to the influx it was temporarily closing Del Rio’s port of entry and re-routing traffic to Eagle Pass, 57 miles (92 km) east.

“We have reiterated that our borders are not open, and people should not make the dangerous journey,” a DHS spokesperson told Reuters.

Del Rio’s mayor, Bruno Lozano, said in a video on Saturday night that there were now just over 14,000 migrants under the bridge.

As it became clear U.S. authorities were sending migrants back to their homelands, Mexican police officers began asking migrants who were buying food in Ciudad Acuna to return to the American side of the river on Saturday morning, according to Reuters witnesses. The migrants argued they needed supplies, and police eventually relented. 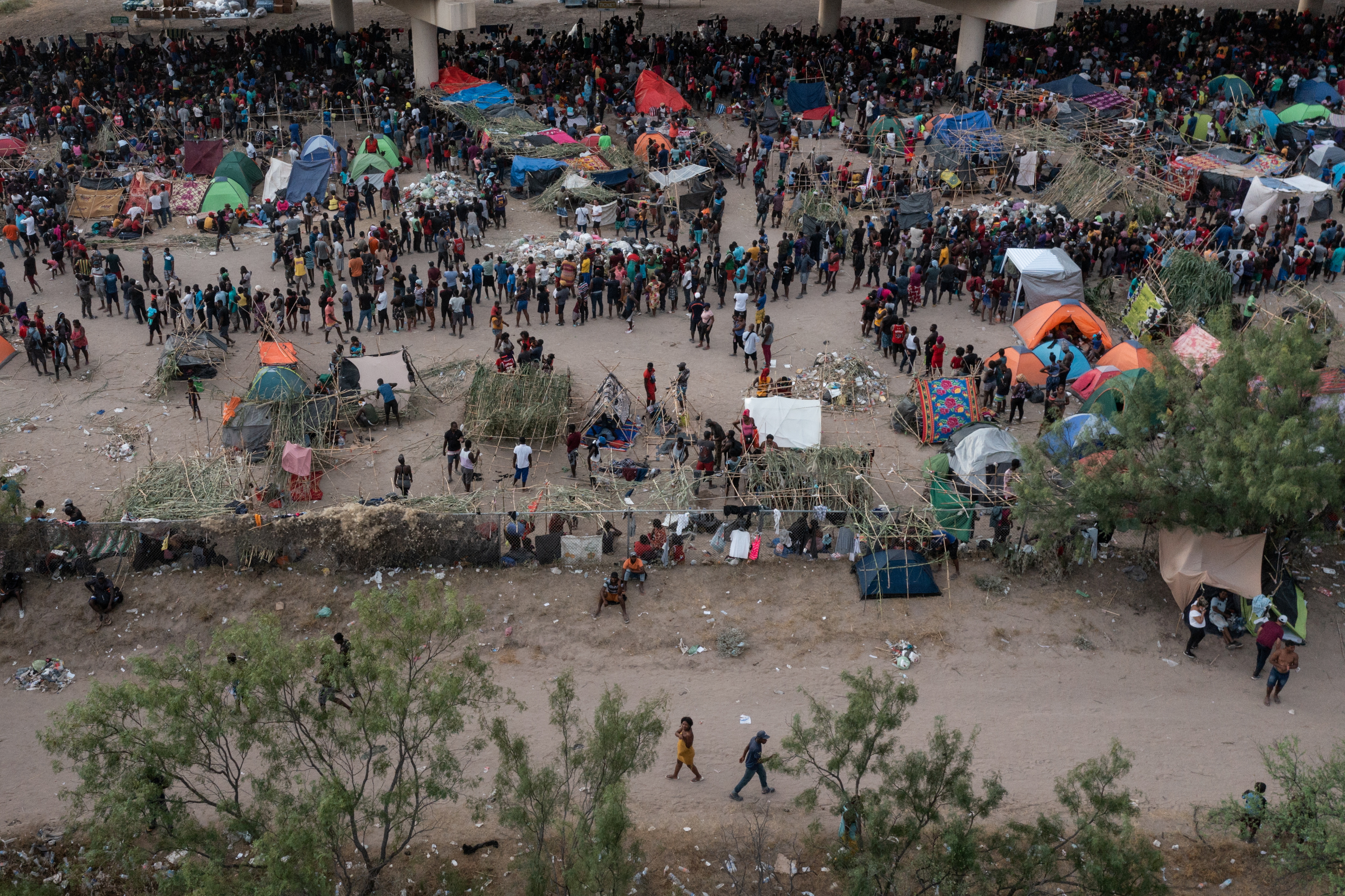 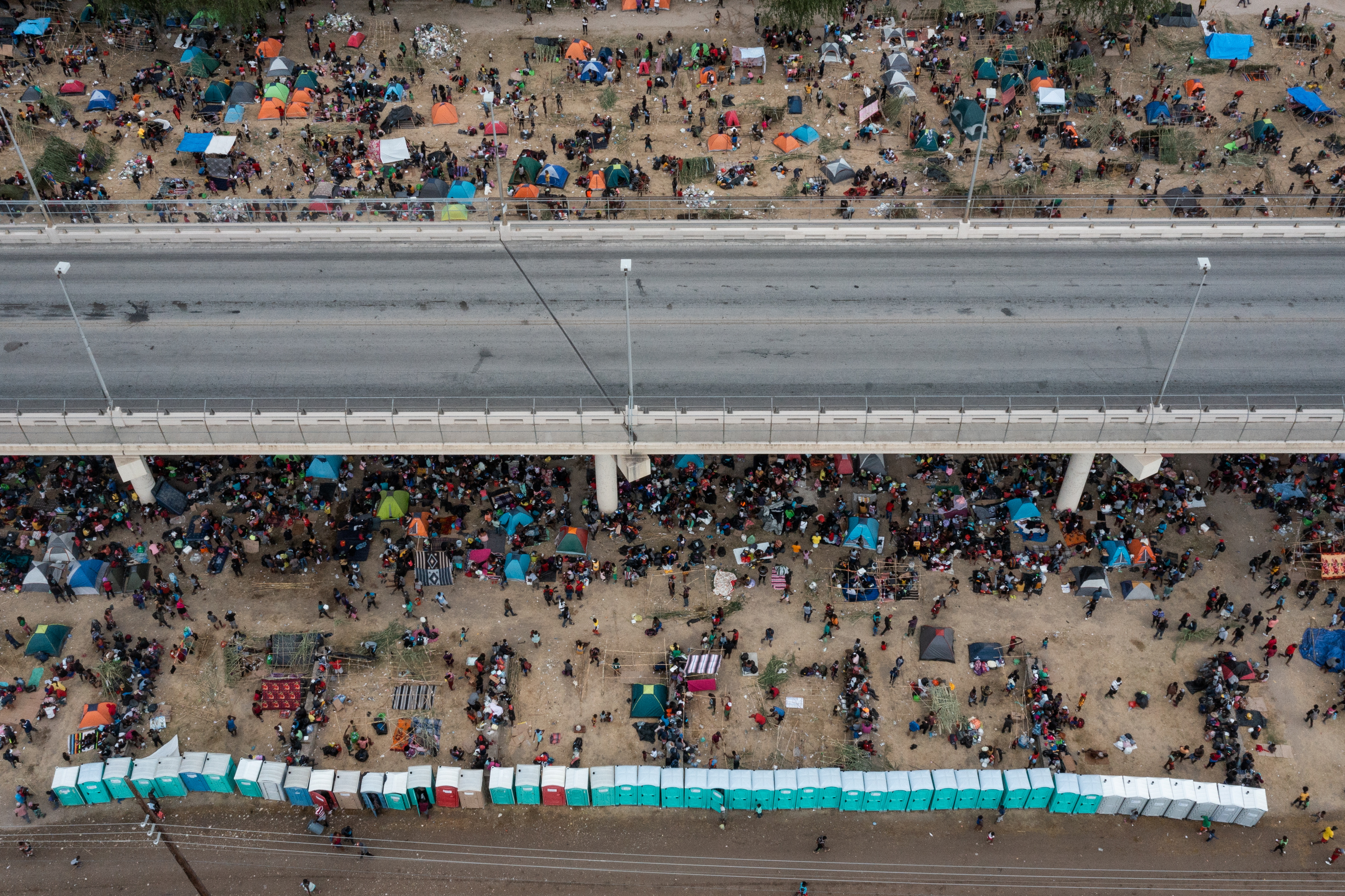 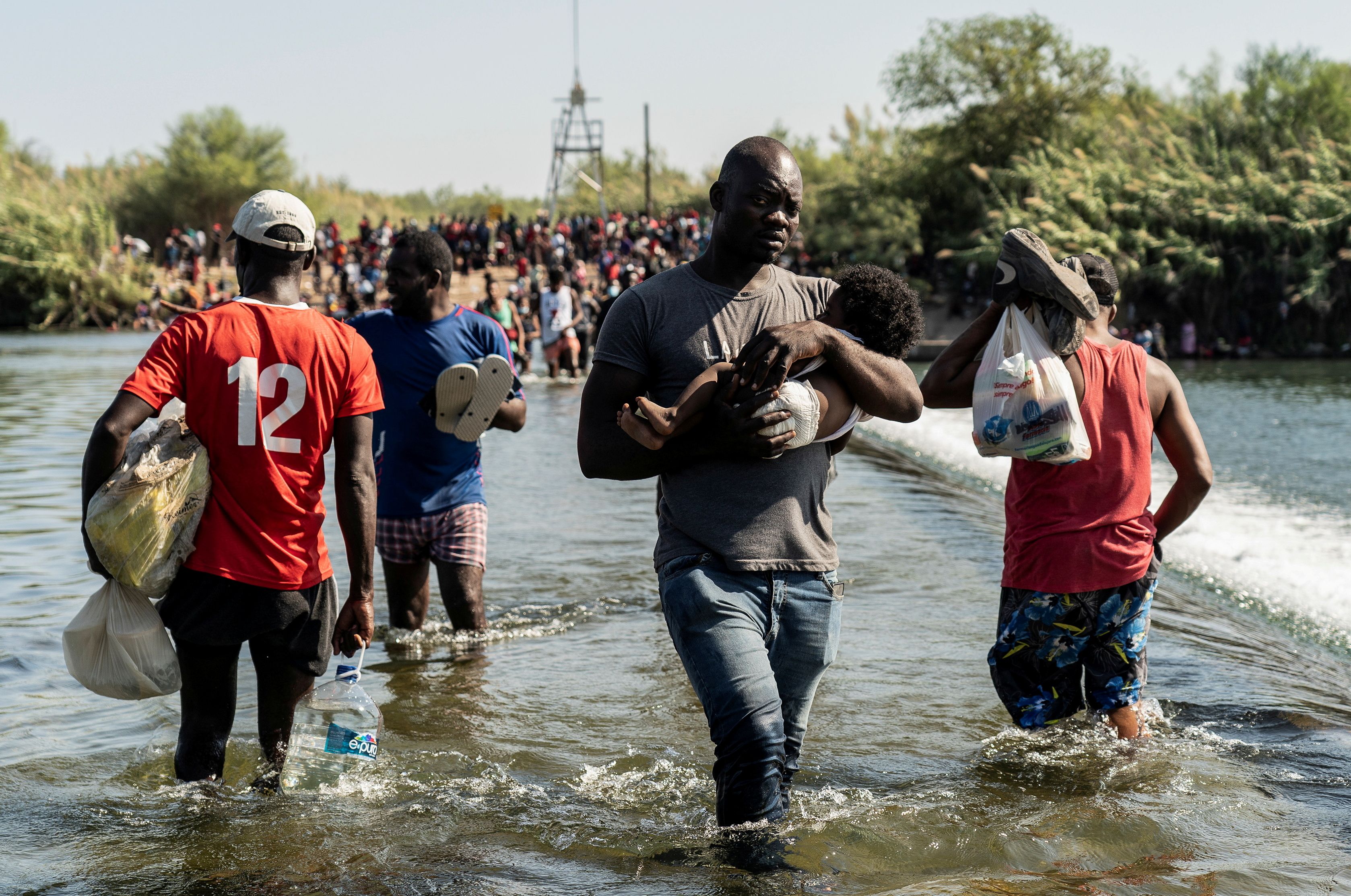 Some thousands of migrants take shelter as they await to be processed near the Del Rio International Bridge after crossing the Rio Grande river into the U.S. from Ciudad Acuna in Del Rio, Texas, U.S. September 18, 2021. Picture taken with a drone. REUTERS/Adrees Latif

On the Texas side, Haitians have been joined by Cubans, Venezuelans and Nicaraguans under the Del Rio bridge, where migrants say conditions are deteriorating.

“There is urine, feces and we are sleeping next to garbage,” said Venezuelan migrant Michael Vargas, 30, who has been at the camp with his wife and two children for three days.

Vargas said they had been given ticket number 16,000 and authorities were currently processing number 9,800. He said people were being separated into three groups: single men, single women and families.

Jeff Jeune, a 27-year-old Haitian, was among several migrants who said it was taking longer to process families than single adults, leaving young children sleeping on the ground in clobbering 99 degree Fahrenheit (37 degrees Celsius) heat. Jeune said his two sons, ages 1 and 10, had fallen ill with fever and cold-like symptoms.

In two photos sent to Reuters by a migrant at the camp, dozens of adults and children are shown squeezed together under the bridge, some sitting on cardboard or thin blankets spread on the packed dirt. Belongings were stacked in neat piles. There appear to be tents made of reeds and wooden sticks in the background.

Typically, migrants who arrive at the border and turn themselves in to officials can claim asylum if they fear being returned to their home country, triggering a long court process. The Trump administration whittled away at protections, arguing many asylum claims were false.

A sweeping U.S. Centers for Disease Control and Prevention public health order known as Title 42, issued under the Trump administration at the beginning of the coronavirus pandemic, allows most migrants to be quickly expelled without a chance of claiming asylum. President Joe Biden has kept that rule in place though he exempted unaccompanied minors and his administration has not been expelling most families.

A judge ruled Thursday the policy could not be applied to families, but the ruling does not go into effect for two weeks and the Biden administration is appealing it in court.

A mass expulsion of Haitians at Del Rio is sure to anger immigration advocates who say such returns are inhumane considering the conditions in Haiti, the poorest nation in the Western Hemisphere. In July, Haiti’s president was assassinated, and in August a major earthquake and powerful storm hit the country.

The Biden administration extended temporary deportation relief to around 150,000 Haitians in the United States earlier this year. That relief does not apply to new arrivals. Deportation and expulsion differ technically – expulsion is much quicker.

The number of Haitian migrants arriving at the U.S.-Mexico border has been steadily rising this year along with an overall increase in migrants, according to CBP data.

Many of the Haitians interviewed by Reuters said they used to live in South America and were headed north now because they could not attain legal status or struggled to secure decent jobs. Several told Reuters they followed routes shared on WhatsApp to reach Del Rio.

More than a dozen Haitians in southern Mexico’s Tapachula, near the border with Guatemala, told Reuters on Friday that messages in WhatsApp groups spread lies about the ease of crossing the border.