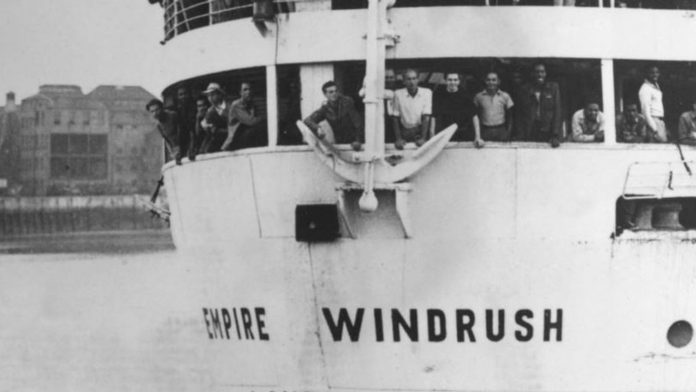 The origins of the Windrush scandal lay in 30 years of racist immigration legislation designed to reduce the UK’s non-white population, according to a leaked government report.

The stark conclusion was set out in a Home Office commissioned paper that officials have repeatedly tried to suppress over the past year.

The 52-page analysis by an unnamed historian, which has been seen by the Guardian, describes how “the British Empire depended on racist ideology in order to function”, and sets out how this affected the laws passed in the postwar period.

It concludes that the origins of the “deep-rooted racism of the Windrush scandal” lie in the fact that “during the period 1950-1981, every single piece of immigration or citizenship legislation was designed at least in part to reduce the number of people with black or brown skin who were permitted to live and work in the UK”.

It finds that the scandal was caused by a failure to recognise that changes to British immigration law over the past 70 years had a more negative impact on black people than on other racial and ethnic groups.

“As a result, the experiences of Britain’s black communities of the Home Office, of the law, and of life in the UK have been fundamentally different from those of white communities,” the report states. “Major immigration legislation in 1962, 1968 and 1971 was designed to reduce the proportion of people living in the United Kingdom who did not have white skin.

It was not clear why officials were reluctant to release the document. Diane Abbott MP, who attempted without success to have the paper released through the home affairs select committee, said the Home Office appeared to be “unwilling to acknowledge the racism that has disfigured British immigration policy for decades”.

The report was commissioned by the Home Office as part of a commitment to educating civil servants about the causes of the Windrush scandal, which saw thousands of people wrongly classified as illegal immigrants by the department. After the scandal, ministers agreed to teach all 35,000 Home Office employees about Britain’s colonial history and the history of black Britons.

The report, named “The Historical Roots of the Windrush Scandal”, focuses on the immigration legislation of the 20th century, rather than on more recent events, such as the effects of the hostile environment policies introduced by Theresa May when she was home secretary.

The unnamed Home Office historian writes: “The British Empire depended on racist ideology in order to function, which in turn produced legislation aimed at keeping racial and ethnic groups apart … From the beginning, concern about Commonwealth immigration was about skin colour.” In the 1950s, British officials shared a “basic assumption that ‘coloured immigrants’, as they were referred to, were not good for British society,” the report states.

The document summarises decades of “dysfunctional relationships between Britain’s institutions and Black and minority ethnic people”, and concludes: “The politics of Britain’s borders, which have been administered for more than a century by the Home Office, are now inextricably connected with race and with Britain’s colonial history.”

Wendy Williams, the independent inspector advising the Home Office on what changes to make after Windrush, said in March that she was “disappointed” the report had not been published a year after officials had signed off on it. It has been made available to staff internally, but requests for it to be made public have been repeatedly rejected.

A freedom of information request about the document was refused. Acknowledging that the subject was “a matter of legitimate public interest” and that “openness and transparency” were important, the request was nevertheless rejected on the grounds that the Home Office’s response to the Windrush scandal included “sensitive issues involving the development of policies”. Publication of the document could “inhibit discussions and the ability of ministers to take free and frank advice”.

Immigration historians said it was peculiar to suppress a work of history that was funded by the taxpayer. There was speculation over whether the report was withheld internally for a year because its conclusions were at odds with the government’s narrative on race. Last year, Tony Sewell’s Commission on Race and Ethnic Disparities report on race said there was no evidence to suggest that Britain was an institutionally racist place. Last month, the prime minister told parliament: “For centuries, our United Kingdom has had a proud history of welcoming people from overseas.”

Simon Woolley, the former CEO of Operation Black Vote and chair of the No 10 race disparity unit July 2020, said the refusal to make the report public was “shameful”. “The government is hellbent in its denial of the systemic nature of racial inequality and in this climate historical facts have become uncomfortable truths that need to be hidden,” he said.

The report also cites a letter from the prime minister of the Federation of the West Indies, Sir Grantley Adams, to the Conservative prime minister Harold Macmillan. Sir Grantley protested that “Britain has begun to take steps which are no different in kind to the basis on which the system of apartheid in South Africa is based” by introducing the 1962 Commonwealth Immigrants Act.

Juanita Cox, a research fellow with the Institute of Commonwealth Studies, working on a Windrush scandal research project, said: “If they admitted the Home Office’s legislation pre-1981 was institutionally racist, current legislation might also come under scrutiny and be found to be even worse. Britain’s immigration system is at complete odds with the proud image it portrays of welcoming immigrants.”

Immigration barrister Grace Brown, who has acted for a number of Windrush victims, said the fallout from the legislation was still being felt. “There’s no justifiable reason why the continuing and long-lasting effect on individuals of historic discriminatory legislation and policy shouldn’t be addressed and corrected today,” she said.

A Home Office spokesperson said the department would not name the historian who wrote the history, adding that the Home Office was making progress towards “becoming a more compassionate and open organisation.”