The United Kingdom has become the first country in Europe to pass 100,000 coronavirus-related deaths as infections around the globe topped 100 million.

With more than 2.1 million dead worldwide, people the world over are mourning loved ones, but the U.K.’s toll weighs particularly heavily: It is the smallest nation to pass the painful milestone.

For comparison, the United States, with five times Britain’s population, has four times the number of deaths at over 425,000.

“It’s hard to compute the sorrow contained in that grim statistic,” a somber Prime Minister Boris Johnson said at a televised news conference.

Alongside mass deaths comes mass grief, made even more acute by the social distancing measures in place to slow the virus’s spread. Charities and other groups are urging the government to offer more help to deal with this “tsunami” of grief and a surge in mental health problems, Pan Pylas reports from London.

Civilian Deaths: The U.K. has now suffered its worst civilian loss of life since World War II by a significant number. Some 70,000 non-combatants perished during the six years of war, including 40,000 in the 1940-41 Blitz alone. Three quarters of a century later, it’s 100,000 taken by the pandemic, an enemy no less relentless and fearsome than Nazi Germany was then and one whose defeat is still some time away.

One hundred thousand dead. For perspective: That’s just over 3,000 more than witnessed England’s only World Cup triumph in 1966 at Wembley Stadium as “Sunny Afternoon” by The Kinks topped the pop charts. And it’s 30,000 more than the crowd that gathered two decades later at the same famous venue for the Live Aid concert. 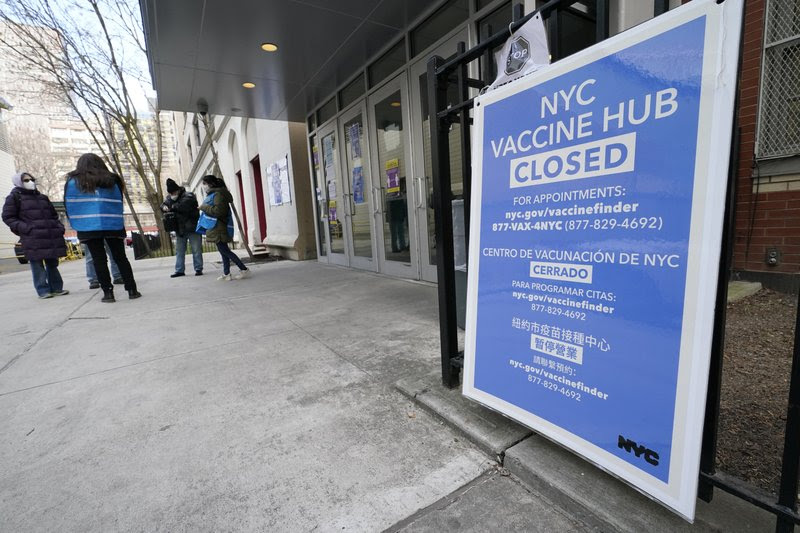 President Joe Biden says the U.S. is ramping up vaccine deliveries to hard-pressed states over the next three weeks and expects to provide enough doses to vaccinate 300 million Americans by the end of the summer or early fall.

Biden has called the push a “wartime effort,” adding that his administration is working to buy an additional 100 million doses of each of the two approved coronavirus vaccines,

He acknowledged that states in recent weeks have been left guessing how much vaccine they will have from one week to the next. Shortages have been so severe that some vaccination sites around the U.S. had to cancel tens of thousands of appointments.

Biden called that “unacceptable” and said “lives are at stake.”

In the meantime, the president is dispatching America’s top scientists and public health experts to regularly update the public about the pandemic. Beginning today, the experts will host briefings three times a week on the state of the outbreak and efforts to control it.

Americans can expect a sharp contrast from the Trump administration’s briefings, when public health officials were repeatedly undermined by a president who shared his unproven ideas without hesitation.

Moral Dilemma: Oregon teachers are eligible for COVID-19 shots before senior citizens after Democratic Gov. Kate Brown decided to prioritize reopening schools. The decision has outraged older people and underscores the moral dilemma that state and local officials across the U.S. are facing as they decide who’s first in line for the vaccine.

Ethicists say America hasn’t faced such a stark moral calculus in generations. Everyone from the elderly and those with chronic medical conditions to communities of color and front-line workers are clamoring for the scarce vaccine. And each group has a compelling argument for why they should get priority, Gillian Flaccus and Sara Cline report from Oregon.

Parade-less Mardi Gras: You can’t keep a good city down, especially when Mardi Gras is coming. All around New Orleans, thousands of houses are being decorated as floats because the pandemic canceled the elaborate parades usually mobbed by crowds during the Carnival season and on Fat Tuesday. The “house float” movement started almost as soon as a city spokesman announced in November that parades were cancelled, Janet McConnaughey reports.