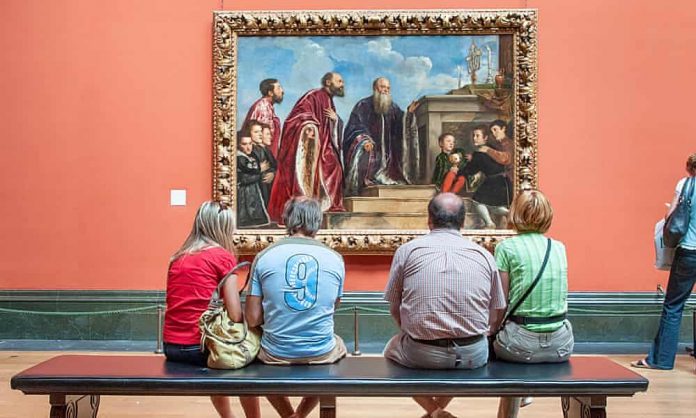 Guardian UK- Museums, galleries and cinemas will be allowed to reopen from 4 July, alongside pubs, restaurants and hairdressers, Boris Johnson will announce on Tuesday in a decisive but potentially risky easing of lockdown measures in England.

Two days later, millions of people with underlying health issues will be permitted to leave their homes and mix with groups for the first time in three months, it was announced on Monday.

But as Downing Street hailed the “opening up”, doctors, unions and charities voiced concerns over the shift away from lockdown and the planned halving of the 2-metre distancing rule that has been in place since March. The change has been billed by Downing Street as ultimately a political decision based on balancing health concerns and economic wellbeing.

Unions representing shop and hospitality staff complained of a lack of consultation by the government over the reduced distance rule, set to be formally announced by Johnson in the Commons on Tuesday. All the changes apply to England only, and are dependent on continued lower infection rates.

On the gradual pull-back of shielding rules, which start on 6 July and by August will see all 2.2 million people classified as “clinically extremely vulnerable” allowed to return to work, charities and the Royal College of Physicians said those affected would be anxious about their safety.

The much-anticipated cut in the minimum physical distancing measure from 2 metres to 1 metre was set to be formally approved by the government’s Covid-19 strategy committee, chaired by Johnson, on Monday evening. It was then due to be rubber-stamped by cabinet on Tuesday, and presented to the Commons.

The government is also set to confirm 4 July as the date for the reopening of pubs, cafe and restaurants, as well as cinemas, museums and galleries, expected to involve measures such as one-way systems and pre-booked tickets to limit numbers.

Later this week, ministers will publish a bill setting out ways it can help businesses remain viable. This will focus on ideas like making it easier for them to expand into outdoor seating, and ease restrictions on selling food and drink to take away.

But ahead of the change, unions said they still had deep concerns about the downgrading of the 2-metre rule, with one senior official describing it as a “nightmare” for workers and customers.

Usdaw, which represents shop staff, said changing the rule would be confusing and expensive, considering the amount of signage and plastic screens that have been invested in to keep people safe at 2 metres.

Doug Russell, health and safety officer for Usdaw, said: “A lot of hard work has gone into figuring out how you could get the message across for 2 metres and to be honest it’s not perfect but a sudden change of direction through the process would be a nightmare.

“Already one of the key triggers of arguments and fights is over physical separation, if you get a situation where half the population thinks social distancing is over, and the other half are very scared about getting too close, then this could lead to problems.”

Ian Hodson, national president of the Bakers, Food and Allied Workers Union, said: “This potential change feels sudden and trade unions haven’t been consulted and there’s a huge risk to working people. There should be a discussion about this, and not just among the backbenches of the Conservative party.”

The Unite union, meanwhile, said downgrading from 2 metres risked causing more outbreaks of coronavirus within the meat processing sector, which has already been hit.

While Sir Patrick Vallance, the government’s chief scientific adviser, and Chris Whitty, the chief medical officer for England, would attend the Covid committee to approve the distance change, Johnson’s spokesman said it was ultimately up to the government. “It’s for the committee to determine the next steps,” he said. “It’s obviously for ministers to take policy decision, as has always been the case.”

Under plans announced by Matt Hancock, the health secretary, from 6 July, those in England ordered to shield due to medical vulnerabilities can gather outdoors with up to six people, and form a “bubble” with another household.

Government support for the 2.2m who are shielding will continue to the end of July. After that point, people in the group will be able to return to their jobs if their workplace is considered “Covid-secure”.

Hancock thanked those who have been shielding since the lockdown began. “I know this has been incredibly tough. Shielding has involved not leaving your house for months, not seeing people you care about, not being able to wander to the park for some fresh air, or even pop to the shops for something you need. This sacrifice has been for a purpose, and I want to thank every single one of you,” he told the Downing Street press briefing.

The Royal College of Physicians (RCP), which represents many of the consultants who look after the most vulnerable, said the announcement would be met with mixed emotions.

“The past few weeks and months have been challenging and we know that many patients will be unsure about what lies ahead,” said Prof Donal O’Donoghue, the RCP registrar.

“It is crucial that the government builds trust by regularly communicating and engaging with those who have been shielding up to now. Patients are likely to have many questions and we need to ensure that frontline NHS staff are equipped with the detailed scientific evidence base to be able to support patients to make their shared decisions based on individual assessments of risk and their personal priorities.”

Chris Askew, chief executive officer at Diabetes UK, said: “The government has again given little to no acknowledgement of the impact that these changes will have on thousands of people living with conditions such as diabetes, or detailed the support and protections they can expect. By allowing lockdown to continue to ease without specific and enforceable safeguards in place, they are allowing people with diabetes to fall through the cracks.

“Thousands of people with diabetes are telling us that social distancing at work is not being made possible, and that employers’ risk assessments are failing to protect them. Without more robust guidance, employers will continue to decide their own ‘acceptable risk’ with no safeguards for individual staff, or consequences for non-compliance.”

A No 10 source said: “We are only able to move forward this week because the vast majority of people have taken steps to control the virus. But the more we open up, the more important it is that everyone follows the social distancing guidelines. We will not hesitate to reverse these steps if it is necessary to stop the virus running out of control.”