The mayor of the decimated Ukrainian city of Mariupol branded the Russians ‘ non-humans” for their psychopathic brutality. It’s ironic that his view echoed the racist ‘Untermenschen’ (sub-human) description Adolph Hitler placed on the Russians.

It has human rights experts forming a case for war crimes against Russian President Vladimir Putin. But, getting him to any eventual trial would be another matter.

Yet, back in 1940 when Nazi Germany invaded Russia it gained the world’s sympathy, with people quickly forgetting the short-lived pact it signed with Germany, dividing up Poland between them.

Now, with Russia invading Ukraine, a peaceful democratic nation, acting as barbaric hordes, the world gasps in disbelief that something unthinkable in the 21st Century is happening.

Ever since the 1917 Bolshevik Revolution, Russia has been cast as a rogue nation by the West. And it has not disappointed with its acts of brutality and barbarism under a butcher such Joseph Stalin and now Vlad Putin.

Yet, Russia has long seized upon its pariah image as the West’s desire to overthrow its government and make the world’s biggest country into the wealthy West’s lapdog. This has morphed into a national paranoia where Russia is always an innocent victim of western malevolence.

But history reveals a different picture. What’s being played out in Ukraine now is almost a carbon copy of the 1939 Winter War when Russia invaded peaceful Finland.

The war began on 30 November 1939, three months after the outbreak of World War II, and ended three-and-a-half months later with the Moscow Peace Treaty on 13 March 1940 in which Finland ceded land to Russia.

As with the current Ukraine war, despite superior military strength, especially in tanks and aircraft, the Soviet Union suffered severe losses and initially made little headway. The League of Nations deemed the attack illegal and expelled the Soviet Union from the organisation. Sound Familiar?

As with Ukraine, the outcome wasn’t dictated by Finland’s will to fight but by a shortage of weapons and troops. Possibly with this in mind, NATO is trying to supply Ukraine with a supply of modern weaponry.

In addition to the Winter War, Russia has militarily quelled independence uprisings from Hungary in 1956 and Czechoslovakia in 1968. So for Russia to cast itself as an innocent victim of western imperialism isn’t supported by the facts.

Unless there are successful peace talk the carnage and destruction will increase with every battle. The outcome will depend on how long Ukraine can hold out against superior Russian forces.

Or if heavy Russian losses will eventually force a palace coup against Putin, something unlikely.

What we do know now is western condemnations, sanctions, calls for war crimes trials and probes, are having little effect on the war. And direct NATO involvement is not yet, or may never be, an option.

To make matters more complicated, Finland and Sweden, not taking the hint in what’s happening to Ukraine, have expressed a wish to join NATO, if you can believe it. The spark that ignited the Russian Ukraine invasion, NATO membership, which Sweden and Finland have rejected for 70+ years, with mind-boggling timing, is now on their tables. Needless to say, Putin wasted no time in issuing threats to the Baltic pair over this eventuality.

At the end of all this, we are left with a hard to swallow reality: Russia can do just about anything it wants and no one in the West will do anything militarily to stop it.

What’s left? Possibly a hefty reward for Vladimir Putiin, Wanted by the International Criminal Court for crimes against humanity.

That’s what wealthy Russian businessman Alex Konanykhin has done. Now living in the West, he posted such as offer along with an old western movie-wanted poster. It garnered the attention of millions online within a few hours. He promised to pay $1million to anyone ousting Putin from power and having him face justice.


Konanykhin also clarified the following in another Facebook post — “Some reports suggest that I promised to pay for the assassination of Putin. It is NOT correct. While such an outcome would be cheered by millions of people around the world, I believe that Putin must be brought to justice.” 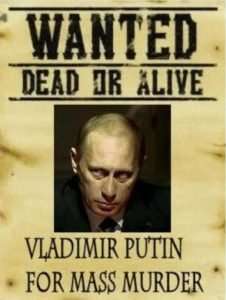