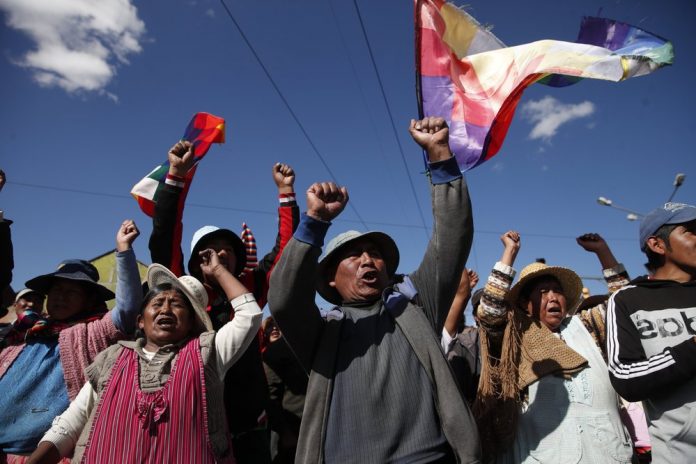 The negotiations proposed by envoy Jean Arnault would involve lawmakers from Morales’ political party, mobilized groups and representatives of interim leader Jeanine Áñez and be mediated by the United Nations and the Roman Catholic Church, the presidency minister, Jerjes Justiniano, said. No date had been set for talks.

Áñez, who declared herself president after Morales resigned Nov. 10 after weeks of protests against him over disputed election results, has said her priorities are to pacify Bolivia and hold new elections within three months. Morales’ supporters, who took to the streets after he quit under pressure from the military, are demanding the return of the leader, who was Bolivia’s first indigenous president.

A clash on Friday left nine pro-Morales coca growers dead and led to an ultimatum from protesters for Áñez to step down and withdraw troops that have been blocking them from entering central Cochabamba from the nearby town of Sacaba.

Thousands of Catholic faithful prayed for peace Sunday, which proved a day of relative calm in the crisis that began after the contentious Oct. 20 presidential election that Morales claimed he won outright, but his opponents contended was fraudulent. As protests by his foes grew, Morales resigned at the urging of the military and flew to Mexico, which granted him asylum.

At least 23 people have died since the crisis broke out, according to Bolivia’s Ombudsman’s office.

Road blockades are causing food and fuel shortages in cities, particularly in the capital of La Paz. People say markets are short of fruits and vegetables.

Pro-Morales lawmakers control almost two-thirds of the legislature and have called a session for Tuesday to demand the withdrawal of the military, said Sergio Choque, president of the Chamber of Deputies.

Members of Bolivia’s interim government fear pro-Morales legislators will reject Morales’ resignation as president, paving the way for him home. Morales has said he was ousted by a coup d’etat.

“They want to hinder the interim administration,” said lawmaker Gonzalo Barrientos. “If an agreement is not reached, President Áñez could call elections by decre