TEHRAN (FNA)- Deputy Permanent Representative of the Islamic Republic of Iran to the United Nations Zahra Ershadi warned that the US unilateral sanctions against independent states would leave negative impacts on global peace.

Addressing a UN meeting on Wednesday, Ershadi cautioned of the adverse effects that unilateral US sanctions have on international peace as the world body’s General Assembly adopts a resolution against the nearly 60-year-old US economic embargo on Cuba. 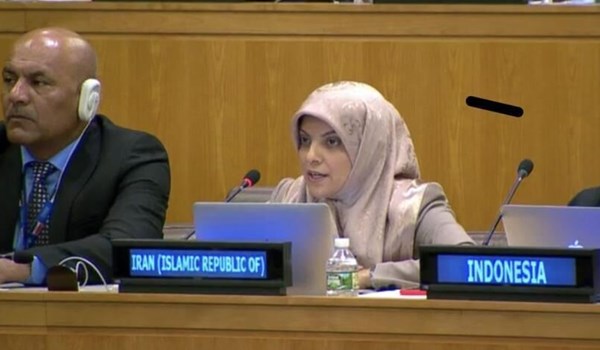 She said on Wednesday that the US embargo inflicts hardship and suffering on Cubans, specially women and children, leading to harmful consequences for the country’s financial, banking, commercial, investment, tourism, health, educational and cultural sectors.

“Unilateral and coercive US sanctions have adverse effects on the promotion of regional and international peace. They are also a fundamental obstacle to the establishment of world peace, prosperity and an international justice system, which are vital preconditions for sustainable development,” Ershadi said.

“For many years, the General Assembly has decisively voted in favor of resolutions calling for the lifting of US sanctions against Cuba. It has expressed its solidarity with the Cuban government and people, but the United States has over the past six decades slapped economic, trade, and financial bans that violate international law as well as its obligations under the UN Charter.”

Ershadi said that the Islamic Republic has, over the past four decades, experienced illegal US sanctions, which have even targeted the imports of medicines and medical equipment into the country.

Through sanctions, the US not only violates the UN Charter and UN Security Council Resolution 2231 that endorsed the 2015 Iran nuclear deal, but also punishes other countries which honor their own commitments, she added.

At a time when all nations are mobilizing their efforts to overcome the challenges posed by the COVID-19 pandemic, the US coercive measures have severely hampered the fight against the disease.

“The international community must work to find solutions to counter such destructive and unilateral interventions. The Islamic Republic of Iran believes in cooperation with friendly countries such as Cuba to meet this challenge,” the Iranian diplomat said.

“The US should immediately and fully comply with its international obligations and cease all its coercive unilateral measures,” she added.

In the meeting held in-person on Wednesday at the UN headquarters in New York, the UN General Assembly adopted a resolution calling for an end to the US embargo on Cuba.

The motion was approved for the 29th year in a row with 184 votes in favor, three abstentions and two no votes cast by the US and Israel.