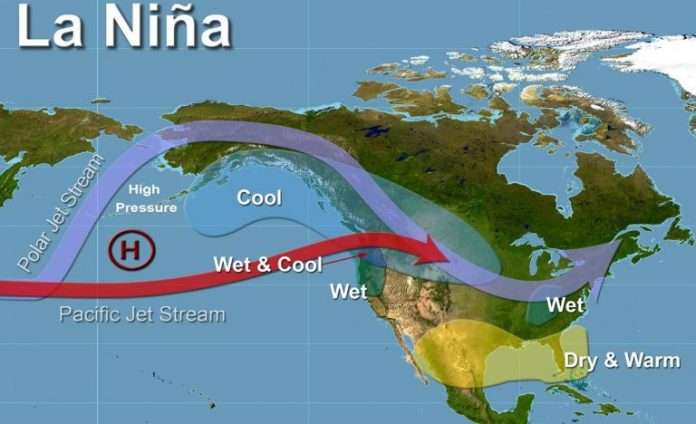 The United Nations weather agency predicts that the La Nina phenomena will linger until the end of the year, a mystery “triple dip”, the first this century, created by three years of its effect on global climate patterns such as drought and flooding.

According to the World Meteorological Organization, La Nina conditions, which involve a large-scale cooling of ocean surface temperatures, have strengthened across the eastern and central equatorial Pacific in recent weeks due to an increase in trade winds.

The agency’s top official was quick to point out that the “triple dip” does not imply that global warming has slowed.

“It is exceptional to have three consecutive years with a La Nina event. Its cooling influence is temporarily slowing the rise in global temperatures, but it will not halt or reverse the long-term warming trend,” WMO Secretary-General Petteri Taalas said.

La Nina is a natural and cyclical cooling of parts of the equatorial Pacific that affects weather patterns around the world, as opposed to El Nino, which is an opposite phenomenon.

La Nina is frequently associated with an increase in Atlantic hurricanes, less rain and more wildfires in the western United States, and agricultural losses in the central United States.

According to studies, La Nina is more expensive to the United States than El Nino.

El Nino, La Nina, and the neutral condition are referred to as ENSO, which stands for El Nino Southern Oscillation, and they have one of the largest natural effects on climate, scientists say, at times augmenting and at other times dampening the large effects of human-caused climate change caused by the burning of coal, oil, and gas.