Basseterre, St. Kitts – The Federation of St. Kitts and Nevis has made history with the opening of the first Park Hyatt hotel in the Caribbean, Prime Minister the Honourable Dr. Timothy Harris said Dec. 6 during his address in the National Assembly on the 2018 budget.

The hotel’s opening is also auspicious because of its comparatively higher wages, which have created greener pastures in the tourism industry. “Now that the hotel is operational, the benefits will be sustained through the direct employment of approximately 320 [people], of which a solid 93 percent are citizens of St. Kitts and Nevis,” Harris said, while noting that “the 320 [people] are among the recipients of the highest wages being paid in the tourism industry.”

The prime minister went on to note that this “stands to reason” because he has met and conversed with employees of Park Hyatt St. Kitts Christophe Harbour who hail “from Gingerland, Newcastle and elsewhere” in Nevis. “As you converse with them, they tell you that they were with Four Seasons [Resort Nevis], which is top class,” Harris added. “Well, I wonder then, what would entice them to journey over waters, at times troubled waters, to come over to St. Kitts – apart from the new, nice loving relationship between the NIA [Nevis Island Administration] and the federal government. It must be that the pastures are greener at Park Hyatt than it is perhaps at Four Seasons.”

The term “greener pastures” means “a new place or activity that offers new opportunities,” as defined by the Cambridge Dictionary.  So Prime Minister Harris used the term appropriately when referring to the new opportunities for advancement in the tourism industry brought about by the new arrival of the Park Hyatt St. Kitts.

The Honourable Prime Minister also said that several Park Hyatt St. Kitts employees are former staff members of the St. Kitts Marriott Resort.  Harris then made reference to a conversation he had with a former Marriott employee, who told him, “I’m getting three times more” at the Park Hyatt.

Harris said in the National Assembly “that is very good. That is what we wish. That is what is meant when we say the rising tide [lifts all boats], and so it means that the other entities are going…to pay higher wages to attract good, quality staff.”

On Friday in the National Assembly, the Hon. Patrice Nisbett, a member of Parliament representing Nevis 11, of the Federal Opposition unfortunately misrepresented those remarks, stating, misleadingly that Prime Minister Harris used the term “greener pastures” to compare Nevis negatively with St. Kitts. This failed attempt at bad faith stands in stark contrast with the Team Unity government’s record of keeping faith with the citizens and residents of St. Kitts and Nevis, particularly in executing its mandate of ensuring economic advancement and a fair share for all.

The Hon. Mark Brantley summed up this record nicely when he spoke at a town hall meeting Feb. 13 in Charlestown, Nevis: “Let us look at the money…because for too long the people of Nevis have said that we have been left out. We have been on the outside of our nation looking in. I will give you the evidence. I am a lawyer by training, so I deal with evidence.”

This money, which flowed “to the citizens of the country, who live and work and who were born in and make Nevis their home is by any measure a significant achievement,” Brantley added back in February, three days shy of the two-year anniversary of Team Unity’s resounding victory at the polls Feb. 16, 2015. 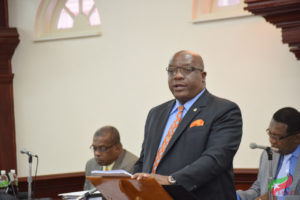