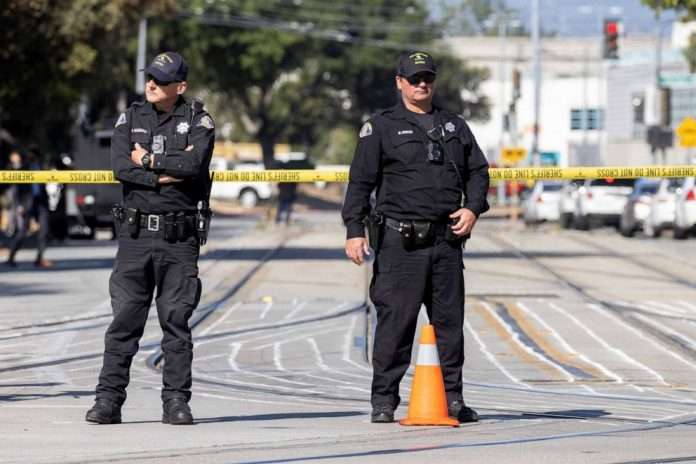 Eight people were killed Wednesday morning during a shooting at a rail yard in San Jose, Calif., according to police, who say the shooter is also dead.

Deputy Russell Davis of the Santa Clara County Sheriff’s Office announced the number of victims during a press conference, saying the investigation is “ongoing” and cautioning that “the numbers can change.”

He said employees at the Valley Transportation Authority (VTA), the facility where the shooting took place, are among the victims.

The suspected shooter, who died in the incident, was identified as a male employee of the VTA.

Davis said authorities will “go with the assumption” that the suspect died from a self-inflicted gunshot wound. He added that deputies on the scene did not exchange gunfire.

Davis also revealed that authorities received information that there are explosive devices in the building. He said a bomb squad has been activated and is currently on the scene “trying to clear out every room and every crevice of that building.”

San Jose Mayor Sam Liccardo (D) told a local television station that there was a fire at the shooter’s home, but nobody was inside.

“That is certainly the information that I have, is that there was a fire at the shooter’s home, there was nobody found inside the home, thank God,” Liccardo told local affiliate KGO, according to CNN.

“It would appear as if the fire was set as the shooter was on his way to the work site,” Liccardo added.

When asked about an area fire at a press conference, Davis said authorities are still gathering information and trying to determine if the situations are connected.

Davis said earlier Wednesday that investigators were on the scene at the rail yard “trying to figure out exactly what happened.”

The VTA control center is a hub that stores a number of trains along with a maintenance yard, and has an indoor and outdoor area, the deputy said.

Glenn Hendricks, the chairperson of the VTA Board of Directors, noted at an earlier press conference that the shooting occurred on the VTA light rail yard, and not in the facilities operations control center.

Multiple reports of shots fired came in at around 6:34 a.m. local time, according to the deputy.

The San Jose Police Department and Santa Clara County Sheriff’s Office tweeted just after 7 a.m. local time that officers were on the scene of an active shooting. Authorities requested people stay away from the area, near Younger Avenue and San Pedro Street.

About an hour later, Liccardo said on Twitter that the shooter was “no longer a threat,” adding that several people were being treated for injuries.

His comments came around the same time the Santa Clara County Sheriff’s Office tweeted “Shooter is down. 2021

He would not reveal, when asked by reporters, what type of weapon was used in the incident.

The deputy also announced that a reunification center has been established in the area for individuals who are looking for family members or trying to get in touch with others.

“Our thoughts and love goes out to the VTA family, the organization and what they’ve had to go through. I could not be more proud of the VTA organization. As I drove here, I saw VTA buses out on the road,” he added.

Hendricks, when asked by reporters, said he did not know the number of people who are regularly working at the facility around 6:30 a.m., but said “it’s early in the morning when light rail service is starting.”

He also declined to reveal information regarding security on the premises.

Liccardo said Wednesday was “a horrific day” for San Jose and a “tragic day” for the VTA family, during a press conference alongside Hendricks.

“Our heart pains for the families and the co-workers because we know that so many are feeling deeply this loss of their loved ones and their friends. Now is a moment for us to collect ourselves, to understand what happened, to mourn and to help those who have suffered to heal. That will be my attention today and for the foreseeable future,” Liccardo said.

“My attention will then be immediately turned to ensuring we do everything possible to ensure this never happens again in our city,” he added.

His ex-wife, Cecilia Nelms, told the Associated Press news agency that Cassidy would tell her that he wanted to kill his colleagues, but she had never believed he would do it.

President Biden on Wednesday called the shooting a “horrific tragedy,” adding that he has the “solemn duty” of again lowering the flag to half-staff, after doing so following the mass shootings in Atlanta, Colorado, South Carolina and Indiana.

He called on Congress to “take immediate action and heed the call of the American people” to “help end this epidemic of gun violence in America.”

“Every life that is taken by a bullet pierces the soul of our nation. We can, and we must, do more,” he added.