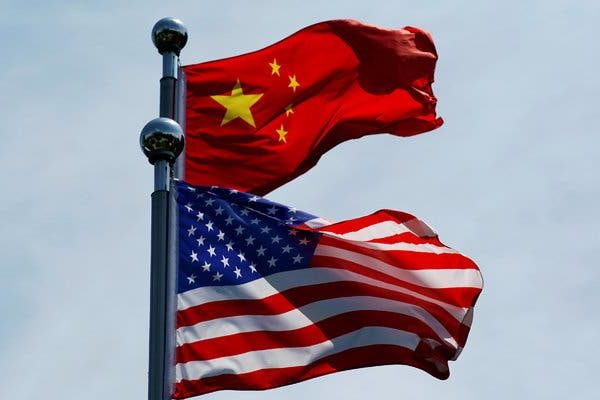 President Trump is blaming China for the coronavirus pandemic threatening lives and the economy in the United States, further testing a relationship with Beijing already stressed by a trade war.

While Trump and Chinese President Xi Jinping praised one another earlier this year over their new trade agreement, both sides are now seeking to pin responsibility on the other for the COVID-19 disease.

Trump on Wednesday opened a press briefing by describing the coronavirus as a “Chinese virus,” echoing remarks by Secretary of State Mike Pompeo and other top cabinet officials

The coronavirus is believed to have originated in a food market in Wuhan, China, and that country has suffered through more than 80,000 cases and 3,200 deaths, according to The New York Times.

Trump’s remarks have fueled criticism that the administration is stigmatizing the virus when it poses a threat to all people and all nations. CBS White House reporter Weijia Jiang also claimed that an unnamed administration official dubbed the virus as “Kung-Flu” to her, suggesting officials are taking Trump’s to make racist remarks about the virus.

Trump on Wednesday defended calling the coronavirus the China virus, and suggested he was doing so in part because of remarks Chinese officials have made to spread propaganda that the U.S. may have been responsible for bringing the disease to their country.

“It comes from China. That’s why. I want to be accurate,” Trump said during a press conference when asked about the criticism. “It is not racist at all … China tried to say at one point — maybe they stopped — that it was caused by American soldiers. That can’t happen. That is not going to happen, as long as I am president. It comes from China.”

A member of China’s Foreign Ministry has publicly linked the coronavirus to the United States.

“When did patient zero begin in US? How many people are infected?” tweeted Lijian Zhao, a spokesman at the Foreign Ministry’s Information Department. “What are the names of the hospitals? It might be US Army who brought the epidemic to Wuhan. Be transparent! Make public your data! US owe us an explanation!”

Other government officials, including a Chinese ambassador, have amplified such unfounded claims that go against experts’ assessment that the virus likely was passed from different animals in the Wuhan wet food market until a host transferred the disease to a human.

Trump’s words are likely to only escalate the battle.

“It is being received very negatively and it will probably invite additional attempts by the Chinese government to point fingers at the United States,” said Dr. Mira Rapp-Hooper, a Schwarzman senior fellow in Asia Studies at the Council on Foreign Relations. “It certainly has the effect of pissing off the Chinese government at a time when they are already engaged in a non-stop propaganda effort.”

Experts on the U.S.-China relationship described the finger pointing as the latest sign of a deteriorating U.S. relationship with China. Since Trump was elected, the two countries have faced multiple battles over trade and the development of 5G telecoms networks, contributing to a general sense of distrust.

Experts say their responses to the crisis is likely a missed opportunity to bring global leadership together and fight the common enemy.

“These are the first and second largest economies, and they are both dealing with a global pandemic,” said Cheng Li, Brookings’ Director of the John L. Thornton China Center. “The common enemy is the virus.”

“This is one of these catastrophic, earth shattering moments that have the potential to pull two otherwise rivals together to provide necessary leadership at a time of crisis and it appears to be pushing them even further apart,” echoed Rapp-Hooper.

Part of the strategy to shift blame comes as the leadership in both countries are currently facing criticism over how they have handled the containment of the virus.

China has come under both international and internal fire for covering up the spread of the virus after the first initial cases were reported and downplaying its severity in early January. An internal speech, later published in mid-February, also revealed that the Chinese president knew about the outbreak roughly two weeks before he made his first public comments about it, sparking questions of why Chinese leaders didn’t work faster to address the deadly issue.

Still, while China bungled its early response, experts say the U.S. has also failed to effectively handle the crisis.

Trump first compared COVID-19 to the flu, while describing the coronavirus as a malicious attempt by the media and Democrats to hurt his administration. Nine days later, he shifted his rhetoric and claimed during a Tuesday press conference that he felt it was “a pandemic long before it was called a pandemic.”

The president tweeted in part on March 9: “The Fake News Media and their partner, the Democrat Party, is doing everything within its semi-considerable power (it used to be greater!) to inflame the CoronaVirus situation, far beyond what the facts would warrant.”

Experts say there are broader implications for the U.S.: The nation is not assuming the role as a global leader at a time of need. Instead, it is scrambling to address the severe shortage of test kits and other equipment, despite the virus being on its radar for months.

“There is a bigger geopolitics effect because of the Trump team’s utter failure to implement obvious and needed actions that every other nation did. It just undermined American power and reputation in a way never before experienced,” Peter Singer, a senior fellow at New America, told The Hill in an interview.

“While we are about to display a basic inability to do the most simple things to save the lives of our citizens, China is now already distributing needed foreign aid and medical equipment to other nations [that are] suffering. China is doing what the U.S. used to do and now isn’t even able to do for itself. This won’t be forgotten on the international stage,” added Singer.

“Some Europeans are actually now concerned about the United States leadership,” echoed Cheng.

Despite the initial cover-up, experts say the international community may view China more favorably since it has offered aid to Western allies facing high transmission rates, like Italy and Spain as well as other countries like Serbia. In other words, stepping in to fill the void now may give China a competitive edge later, after the crisis passes.

“We cannot bungle our own domestic response to a crisis of this magnitude and expect the world to see us the same way several months from now,” said Rapp-Hooper.