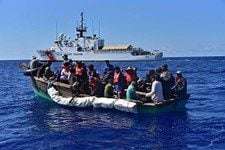 The United States Coast Guard says the crew of its cutter Bernard Webber crew on Saturday repatriated 43 Cuban migrants to their homeland following four interdictions off the Florida Keys.

“The Coast Guard and our partners have increased air and surface patrols in the Florida Straits, Windward and Mona Passages,” said Petty Officer Nicole J. Groll, Coast Guard District Seven. “These waterways are dangerous, unpredictable and the risk for loss of life is great.”

The Coast Guard said it repatriated the 48 Cuban migrants on Thursday the interdictions off the Florida Keys.

Last month the Belize government says it had seen an “upsurge” in the number of Cubans entering the country illegally since re-opening the land borders on February 7, hoping to make their way into the United States.

In a statement, the Ministry of Foreign Affairs, Foreign Trade, and Immigration said the Cubans are among other nationals, entering Belize via irregular means.