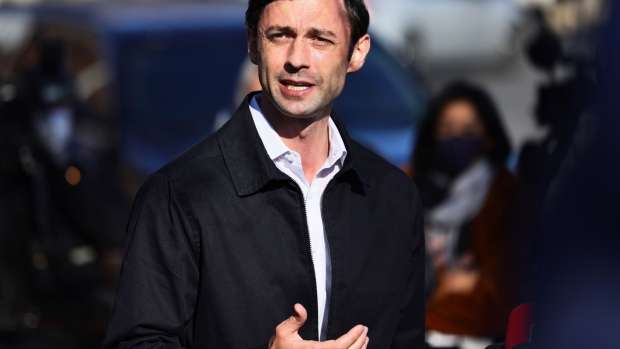 Jon Ossoff notched a critical victory in Georgia on Wednesday, with a projected defeat of Republican David Perdue in a Senate runoff election that will give Democrats control of the upper chamber.

The Associated Press called the race for Ossoff shortly after 4 p.m. EST. Ossoff currently leads Perdue by less than 0.6 percentage points, a slim margin but just over the 0.5-percentage-point threshold that would trigger an automatic recount of the vote.

The runoff was one of two in the Peach State that determines which party will control the Senate – and how effectively President-elect Joe Biden will be able to advance his legislative agenda – beginning Jan. 20.

The dual Democratic victories in Georgia ensure that the party will control the Senate in 2021 and beyond.

“Whether you were for me or against me, I will be for you in the U.S. Senate,” Ossoff said in an online statement.

He held a slight lead of about 16,000 votes over Perdue, a former corporate executive and one-term senator.

Democrats have already captured one of Georgia’s two U.S. Senate seats as Raphael Warnock defeated Republican Senator Kelly Loeffler in one of the runoff races, according to the Associated Press.

In Ossoff’s race, some of the outstanding votes yet to be counted are coming from heavily Democrat precincts. But it could take days to get the final tally, as 17,000 military and overseas ballots can still be counted as late as Friday, and some domestic absentee ballots were still out. The narrow results will almost certainly spark legal challenges or recounts that also could delay a final determination of Senate control.

Two Democratic victories in Georgia would narrowly flip control of the Senate to Democrats. The chamber would be split 50-50 between Republicans and the Democratic caucus, with Vice President-elect Kamala Harris casting tie-breaking votes.

Senate control, paired with the Democrats’ narrow majority in the House, would give Democratic President-elect Joe Biden a unified U.S. government and could smooth the path for his nominations and some major legislation.