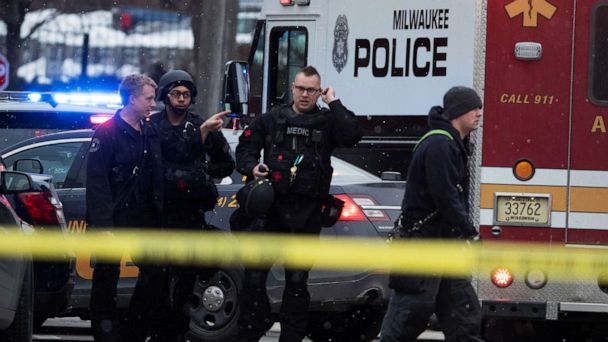 In one of the worst shootings in Wisconsin history, a gunman killed five people — and then himself — during a rampage Wednesday afternoon on the Milwaukee campus of Molson Coors.

The shooter was identified as a 51-year-old man who worked for the company, the home of Miller Brewery for more than a century.

All of the shooting victims died. There were no reports of injuries.

The identities of the victims and the shooter were not released Wednesday. Police did say, however, that the victims’ families have been notified.

Milwaukee Police Chief Alfonso Morales said at an early evening news conference that police were checking on the whereabouts of more than 1,000 employees. “We have to check off employees one by one,” he said.

By 9:30 p.m., that had been done and all employees at the brewery had been allowed to go home, Morales said at a news conference.

Milwaukee Mayor Tom Barrett noted at the late evening news conference that the brewery has been a landmark in Miller Valley for 165 years. “It’s the saddest day we have had” in that history, he said.

At an earlier news conference, the mayor said: “This is a time for us to think about those families because there were five individuals who went to work today, just like everyone goes to work, and they thought they were going to go to work, finish their day and return to their families. They didn’t, and tragically they never will.”

At that gathering, Gov. Tony Evers asked for a moment of silence, then said: “The hearts of the people of Wisconsin go out to the folks that were needlessly murdered.”

Molson Coors CEO Gavin Hattersley, who was in Houston for a conference early in the day, said in an email to employees that the Milwaukee office will close for the rest of the week and the brewery will remain shut down for “the time being to ensure our people have time to cope with today’s events.”

By 9:30 p.m., Hattersley was in Milwaukee, and said he had talked to some employees, thanking them for their bravery.

“This is an unthinkable tragedy for us,” Hattersley said.

Neither law enforcement, nor government nor company officials would address the motive for the shooting.

Ald. Russell Stamper, whose district includes the Molson Coors brewery, offered condolences to the victims and their co-workers.

“The vile and heinous deadly violence that was perpetrated at the brewery complex today has no place in our society and makes no sense,” Stamper said in a statement. “The cold disregard for human lives and the lack of value for human life that was shown must be categorically denounced across Milwaukee, across Wisconsin and throughout our nation.”

Indeed, the tragedy not only made national but international news.

At the start of a White House news conference on coronavirus, President Donald Trump extended his condolences “to the families in Milwaukee where a wicked murderer opened fired in a Molson Coors brewing company plant.”

“It’s a terrible thing. Our hearts go out to the people of Wisconsin,” the president said.

‘Get some more med units here’

Police were called to the complex where beer has been brewed for more than a century at 2:08 p.m. Ten minutes later, employees were notified by email that an active shooter was in or near the second-floor stairwell of the sprawling factory’s Building 4.

Police found the suspect dead from a gunshot wound inside one of the buildings. Five employees were found dead in the same building, Morales said.

The shooter was armed with two handguns, one with a silencer, according to a police source. Silencers or suppressors are legal in 42 states, including Wisconsin. They must be registered with the federal government under the National Firearms Act. According to the latest report from the ATF, more than 29,333 are registered in the state.

Crime involving the devices is relatively rare, according to an often-cited study that said about 150 cases involving silencers were prosecuted in federal court from 1995 to 2004.

“I just overheard on the radio seven — seven — victims. We might want to get some more med units here,” a fire commander said over the radio, repeating the number that other sources also reported.

Then a third commander came on the radio.

“I just had a police officer inform me that the shooter committed suicide and (the officer) believes they have six victims besides the shooter,” the third commander reported to dispatchers.

“Start the casualty collection point and let’s start working on getting med rigs (paramedic units) in here,” the commander said over the radio.

Paramedic units from Milwaukee and West Allis were dispatched, along with officers, some wearing ballistic gear, from the FBI, ATF, Milwaukee County Sheriff’s Office, Marquette University Police Department and the U.S. Marshals Service.

Police blocked off the scene at North 35th and West State streets. Highway 175 was also closed at West State and Vliet streets.

The sheriff’s office held all of its day shift officers, including deputies responsible for patrolling Milwaukee Mitchell International Airport, on duty beyond the scheduled end of their shifts.

At 4:45 p.m., police reported there was no longer a threat but the brewery was still an active crime scene. By 5:30 p.m., employees who had been kept inside for more than three hours were allowed to leave the business.

“People are just going home to be with their families,” said Anthony Rainey, international representative of the United Auto Workers union that represents some of the plant’s workers.

For much of the late afternoon, the brewery was on lockdown, as were nearby businesses and schools.

Employees inside Molson Coors frantically got in contact with those on the outside. James Boyles said his wife, Lasonya Ragdales, told him by text that she was locked in a room with co-workers. She works in the claims department.

One employee who asked that his name not be used told the Journal Sentinel he works in the corporate office about 200 yards from the brewery.

“We were sitting in our office and some of our co-workers started getting up and gathering at the windows and we see law enforcement with their guns drawn running towards the brewery,” he said.

“Then we get this blast email confirming what is going on, that there’s an active shooter. And then managers were walking around, taking people into rooms across the building, away from the brewery.”

A 23-year old Shorewood man said he arrived a half hour early for a 3 p.m. job interview but was turned away by a police officer who told him to call his contact at Miller. When he called, the contact sounded on the verge of tears and said there had been an active shooter incident.

The man, who did not want to give his name, was shaken up by the experience. He had been given the option of a 2 or 3 p.m. interview time slot. If he’d chosen the earlier time, he said, he would have been inside during the shooting.

“I guess I made the right decision,” he said. “It’s scary to think I was so close to being inside the building at that time.”

At Story Elementary School, 3815 W. Kilbourn Ave., a teacher was seen comforting a visibly shaken mother terrified that her children were in danger. She had rushed to the school after hearing the news.

At Woodlands School, 3121 W. State St., Andre Kimbrough said he, along with many other parents, went to pick up their children at the end of school around 3:15 p.m., but got a call from school officials about the lockdown. Many parents circled the block waiting for an all-clear.

Kimbrough said he could see a “stream of police cars,” ambulances and fire trucks. He felt good that the kids were safe inside.

“I’m more worried about how they feel,” Kimbrough said. “They must be kind of freaking out.”

A worker who answered the phone at Highland Educational Academy, a private group child care center at 4212 W. Highland Blvd., said around 3 p.m. that they released children as normal.

Other mass shootings in Wisconsin

In the last 20 years, Wisconsin has been the scene of 11 mass murders.

The worst was in 2005, when seven people were killed and four wounded at a Living Church of God service at the Sheraton Hotel in Brookfield. The shooter, a 44-year-old computer technician, then killed himself.

In 2007, two mass shootings happened just months apart. In June, five people were killed in Delavan when a man shot his twin sons, his wife, her sister, a friend, and then himself. In October, six were killed when a Forest County Sheriff’s Deputy went on a rampage at his ex-girlfriend’s apartment.

Two mass shootings also happened in 2012. In August, six were killed at the Sikh Temple of Wisconsin in Oak Creek by a shooter who committed suicide. And in October, three were killed at Azana Salon & Spa in Brookfield.

“Miller Valley” features a 160-year-old brewery, with a packaging center that fills thousands of cans and bottles every minute and a distribution center the size of five football fields. A massive red Miller sign towers over the complex and is a well-known symbol in Milwaukee, where beer and brewing are intertwined in the city’s history.

The facility is also home to corporate customer service, finance, human resources and engineering. Tours take people to underground caves where beer was once stored, a saloon with intricate woodwork, a stein hall with stained-glass windows, a champagne room meeting hall with leaded-glass windows, and an outdoor beer garden that can hold 300 people.

The brewer now has 610 jobs at the Milwaukee office. Corporate functions based there include human resources, financing and information technology.