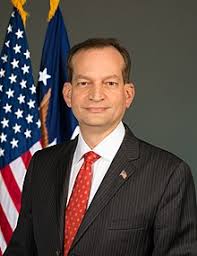 BBC- US Labour Secretary Alex Acosta is resigning amid criticism of his brokering of a plea deal for financier Jeffrey Epstein in a child sex case.

Mr Acosta, a former Florida prosecutor, made the announcement from the White House lawn on Friday with President Donald Trump stood by his side.

Democrats had called for him to quit over his handling of the Epstein case.

Mr Acosta defended the secretly-negotiated plea deal in a news conference only two days ago.

Mr Acosta was the US Attorney in Miami in 2008 when he oversaw a non-prosecution deal against Epstein which allowed Epstein to serve 13 months in jail – with much of that time spent on work release at his Palm Beach office. Epstein’s conduct has come into sharper focus since he was arrested and charged on Monday with sex trafficking underage girls.

Mr Trump told reporters that he and Mr Acosta spoke on the phone earlier on Friday and that it was Mr Acosta’s decision to step down.

“This was him not me,” Mr Trump said, adding that Mr Acosta was “a tremendous talent” who “went to Harvard” University. Earlier this week, Mr Trump told reporters that he felt badly for his labour secretary, but added that he did not know him personally before hiring him.