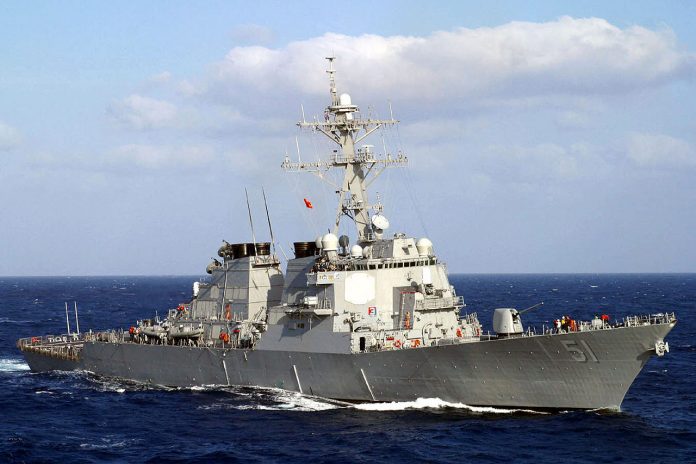 BBC- The US says it is sending warships to the Caribbean to stop illegal drugs. “We must not let the drug cartels exploit the [coronavirus] pandemic to threaten American lives,” President Donald Trump said.

The move comes a week after the US charged Venezuelan President Nicolás Maduro and other senior officials in the country with “narco-terrorism”.

It accused them of flooding the US with cocaine and using drugs as a weapon to undermine the health of Americans.

A $15m (£12.5m) reward was offered for information leading to Mr Maduro’s arrest.

The Venezuelan government called the US deployment a “diversion” from the current pandemic spreading around the US – and the world at large.

The US military deployment will further escalate tensions between the two nations.

Washington has long accused the Venezuelan president of leading a corrupt and brutal regime, a charge he has repeatedly rejected.

But the US deployment comes two days after US Secretary of State Mike Pompeo offered to lift crippling sanctions against Venezuela if Mr Maduro and Mr Guaidó agreed to a power-sharing deal.

Under the US plan, Venezuela’s left-wing president would “step aside” and a transitional council would govern until fresh elections.

The US imposed its latest round of sweeping sanctions against Venezuela last year in an attempt to force Mr Maduro to step down.

However, Mr Maduro has so far resisted all attempts to remove him from power.

What is the new deployment about?

President Trump made the announcement at the White House on Wednesday.

“Today, the United States is launching enhanced counter-narcotics operations in the Western Hemisphere to protect the American people from the deadly scourge of illegal narcotics,” he said.

Mr Trump added that the US was co-operating with 22 partner nations, enabling the US Southern Command to “increase surveillance, disruption and seizures of drug shipments and provide additional support for eradication efforts which are going on right now at a record pace”.

“Donald Trump today tried to divert attention… by creating an escalation of statements and an escalation with Venezuela,” said President Maduro.

“We’re going to stay here in peace… attending to the pandemic, controlling the pandemic.”

What is the US argument on drugs?

The charges against Mr Maduro and 14 members of his inner circle were announced on 26 March and include narco-terrorism, drug trafficking, money laundering and corruption.

US Attorney General William Barr accused Mr Maduro of conspiring with a faction of the Colombian Farc rebel group “to flood the United States with cocaine” and “devastate American communities”.

Mr Barr said the Colombian rebels had “obtained the support of the Maduro regime, who is allowing them to use Venezuela as a safe haven from which they can continue to conduct their cocaine trafficking”.

“Maduro very deliberately deployed cocaine as a weapon… to undermine the health and wellbeing of our nation,” US Attorney Geoffrey Berman said.

He accused Mr Maduro and his top aides of running a “narco-terrorism partnership with the Farc for the past 20 years”.

In a separate statement, the State Department said those named in the indictment had “violated the public trust by facilitating shipments of narcotics from Venezuela, including control over planes that leave from a Venezuelan air base”.

Mr Maduro accused the US and Colombia of conspiring against Venezuela and causing widespread violence in the country.

He has long accused the US of trying to overthrow him in order to seize control of Venezuela’s oil reserves.

What’s the background to the Venezuela crisis?

Mr Maduro narrowly won a presidential election in April 2013 after the death of his mentor, President Hugo Chávez.

He was elected to a second term in May 2018 in an election seen as flawed by international observers.

Venezuela has experienced economic collapse – inflation was 800,000% last year – and 4.8m people have left the country.

Mr Guaidó has accused President Maduro of being unfit for office. He has won the support of many in the country as well as US and EU leaders.

But Mr Maduro has remained in power and is backed by the army – as well as by Russia, China and Cuba.