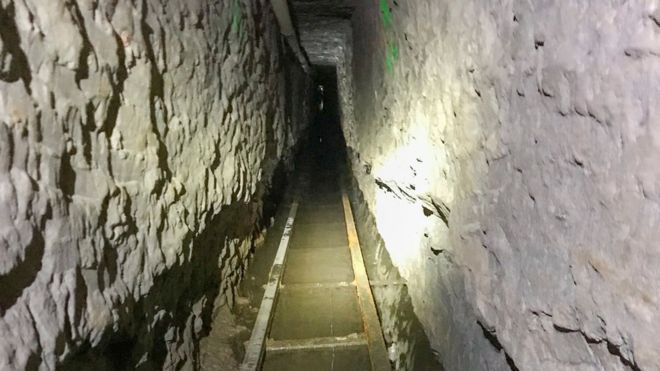 US officials say they have discovered the longest smuggling tunnel ever found on the border with Mexico.

The passageway connected an industrial site in the Mexican city of Tijuana to the San Diego area in California.

There were no arrests made or drugs found. Authorities did not say who they suspected of being behind the tunnel.

But Mexico’s Sinaloa cartel, described by the US government as one of the largest drug-trafficking organisations in the world, operates in the area. Its founder and long-time leader, Joaquin “El Chapo” Guzman, is serving life in prison in the US.

The tunnel was discovered in August. Mexican officials identified its entrance and US investigators mapped it, before releasing the findings on Wednesday.

It has an average depth of 70ft (21m) below the surface, with the tunnel being 5.5ft high and 2ft wide, US Customs and Border Protection said. It was not clear how long it took to build it.

“The sophistication and length of this particular tunnel demonstrates the time-consuming efforts transnational criminal organisations will undertake to facilitate cross-border smuggling,” Cardell Morant, acting special agent in charge of Homeland Security Investigations in San Diego, said in a statement.

More than a dozen sophisticated tunnels have been found on California’s border with Mexico since 2016. The second-longest tunnel in the US, found in San Diego in 2014, was 2,966ft long, the CBP said.

US President Donald Trump has made building a border wall one of his key priorities, saying it is needed to tackle illegal immigration and drug trafficking. But officials say most drugs are smuggled through legal ports of entry, hidden in privately-owned vehicles or transporter lorries, mixed with other goods.