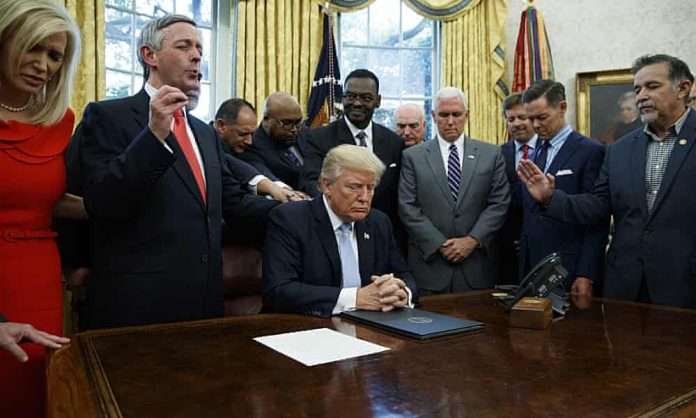 Percentage of churchgoing Americans is steadily falling, and the swirl of rightwing politics and Christianity is playing a key role

Guardian (UK)- Fewer than half of Americans belong to a house of worship, a new study shows, but religion – and Christianity in particular – continues to have an outsize influence in US politics, especially because it is declining faster among Democrats than Republicans.

Just 47% of the US population are members of a church, mosque or synagogue, according to a survey by Gallup, down from 70% two decades ago – in part a result of millennials turning away from religion but also, experts say, a reaction to the swirling mix of rightwing politics and Christianity pursued by the Republican party.

The evidence comes as Republicans in some states have pursued extreme “Christian nationalist” policies, attempting to force their version of Christianity on an increasingly uninterested public.

This week the governor of Arkansas signed a law allowing doctors to refuse to treat LGBTQ people on religious grounds, and other states are exploring similar legislation.

Gallup began asking Americans about their church membership in 1937 – and for decades the number was always above 70%. That began to change in 2000, and the number has steadily dropped ever since.

Some of the decline is attributable to changing generations, with about 66% of people born before 1946 are still members of a church, compared to just 36% of millennials.

David Campbell, professor and chair of the University of Notre Dame’s political science department and co-author of American Grace: How Religion Divides and Unites Us, said a reason for the decline among those groups is political – an “allergic reaction to the religious right”.

“Many Americans – especially young people – see religion as bound up with political conservatism, and the Republican party specifically,” Campbell said.

“Since that is not their party, or their politics, they do not want to identify as being religious. Young people are especially allergic to the perception that many – but by no means all – American religions are hostile to LGBTQ rights.”

Research by Campbell shows that a growing number of Americans have turned away from religion as politicians – particularly Republicans – have mixed religion with their politics. Campbell says there has always been an ebb and flow in American adherence to religion, but he thinks the current decline is likely to continue.

“I see no sign that the religious right, and Christian nationalism, is fading. Which in turn suggests that the allergic reaction will continue to be seen – and thus more and more Americans will turn away from religion,” he said.

The number of people who identify as non-religious has grown steadily in recent decades, according to Michele Margolis, associate professor of political science at the University of Pennsylvania and author of From Politics to the Pews. More than 20% of all Americans are classed as “nones”, Margolis said, and more than a third of Americans under 30.

“That means non-identification is going to continue becoming a larger share of population over time as cohort replacement continues to occur,” Margolis said. But she agreed another factor is the rightwing’s infusion of politics with theism.

“As religion has been closed linked with conservative politics, we’ve had Democrats opting out of organized religion, or being less involved, and Republicans opting in,” she said.

Christian nationalists – who believe America was established as, and should remain, a Christian country – have pushed a range of measures to thrust their version of religion into American life.

In states including Louisiana, Arkansas and Florida, Republicans have introduced legislation which would variously hack away at LGTBQ rights, reproductive rights, challenge the ability of couples to adopt children, and see religion forced into classrooms.

The governor of Arkansas recently signed into law a bill that allows medical workers to refuse to treat LGBTQ people on religious grounds. Montana is set to pass a law which would allow people or businesses to discriminate, based on religion, against the LGBTQ community.

“Do not make me NOT do what my God tells me I have to do,” said Republican Montana congressman John Fuller, a supporter of the law.

Alison Gill, vice-president for legal and policy at American Atheists, who authored a report into the creep of Christian extremism in the US, warned that the drop-off in religious adherence in America could actually accelerate that effort, rather than slow it down.

“Surveys of those who identify with Christian nationalist beliefs consistently show that this group feels that they are subject to more discrimination and marginalization than any other group in society, including Islamic people, Black people, atheists, [and] Jewish people,” Gill said.

“They are experiencing their loss of prominence in American culture as an unacceptable attack on their beliefs — and this is driving much of the efforts we are seeing to cling onto power, undermine democracy, and fight for ‘religious freedom’ protections that apply only to them.”

The influence of religion over politics is stark, Gill said.

“America perceives itself to be a predominantly religious society, even if the facts no longer agree. Politicians often feel beholden to pronounce their religious faith – and are attacked for a perceived lack of it,” she said.

While the danger of a right-wing backlash is real, Annie Laurie Gaylor, co-founder of the Freedom From Religion Foundation, said that the Gallup data suggests the US is moving in a positive direction.

“We have this constitutional separation of church and state in America, and our constitution is godless, and it says you can’t have a religious test for public office, and yet you virtually have to wear religion on your sleeve in order to be elected,” Gaylor said.

“There is movement [away from religion], and we’re just delighted to see this. We think it’s great that Americans are finally waking up.”