The responsibility to free the British-flagged oil tanker seized last week by Iran “falls to the United Kingdom,” Secretary of State Mike Pompeo told “Fox & Friends” Monday, while warning the “whole world is waking up to the fact that this [Iranian] threat is real.”

The comments from Pompeo come as British Prime Minister Theresa May issued a fresh call for Iran to release the Stena Impero ship and its 23-person crew. The vessel, which was captured Friday in the Strait of Hormuz, currently is anchored outside the Iranian port city of Bandar Abbas.

“The responsibility…falls to the United Kingdom to take care of their ships,” Pompeo said when asked what role the U.S should play in the matter. “This is a bad regime. It’s not honoring the people of Iran. They have now conducted what amounts to national piracy – a nation-state taking over a ship that’s traveling in international waters.”

Two armed members of Iran’s Revolutionary Guard inspect the British-flagged oil tanker Stena Impero, which was seized in the Strait of Hormuz on Friday by the Guard, in the Iranian port of Bandar Abbas. (AP/Mehr News Agency)

Pompeo said the “the United States has a responsibility to do our part, but the world’s got a big role in this too – to keep these sea lanes open.”

He added that Iran’s recent behavior should alarm nations around the globe.

An aerial view shows a speedboat of Iran’s Revolutionary Guard moving around the British-flagged oil tanker Stena Impero which was seized in the Strait of Hormuz on Friday. (AP/Tasnim News Agency)

May, speaking to reporters Monday, again demanded the release of the British-flagged tanker.

“The ship was seized under false and illegal pretenses and the Iranians should release it and its crew immediately,” she said, according to Reuters. “We do not seek confrontation with Iran but it is unacceptable and highly escalatory to seize a ship going about legitimate business through internationally recognized shipping lanes.”

During the weekend, Iran released video purportedly showing its Revolutionary Guards soldiers in black ski masks and fatigues rappelling from a helicopter onto the oil tanker. Senior Iranian officials have said the ship’s seizure was carried out in retaliation for British forces helping to capture an Iranian tanker off the island of Gibraltar on July 4. 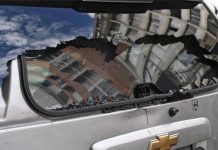 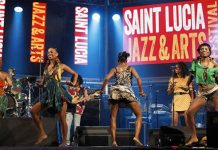