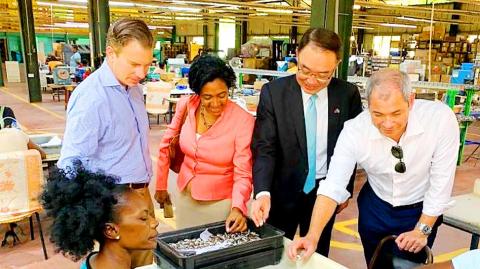 A Taiwan-US business delegation has visited Saint Lucia this week to increase private sector investment in the Caribbean nation, marking the first time the two nations jointly embarked on a trade mission to one of Taiwan’s diplomatic allies, the Ministry of Foreign Affairs said yesterday.

“A US-Taiwan delegation has visited #StLucia to increase private sector investment,” the US embassy in Barbados wrote on its Twitter account on Wednesday.

The trip was aimed at helping Taiwan consolidate relations with its allies through the promotion of increased trade and investment, the ministry said in a statement.

Taiwan has been attaching great importance to its relations with diplomatic allies and to its friendly partnership with the US, it said.

The nation will continue to work with the US and other like-minded countries, in a bid to explore commercial opportunities in allied countries and seek win-win situations, it added.

The visit came after Taiwan lost two Pacific allies — the Solomon Islands and Kiribati — in September. Taiwan now has only 15 diplomatic allies.

The severance of ties prompted the US last month to hold a meeting with representatives from seven of Taiwan’s diplomatic allies in an effort to help the country keep its remaining allies around the world.

Among the top issues on the meeting agenda was how to strengthen cooperation between Taiwan and its allies in the Western Hemisphere through a wide range of measures to facilitate infrastructure, trade and investment, as well as how to safeguard democratic values.

The meeting was organized by Washington in conjunction with the joint annual meeting of the World Bank Group and the IMF in Washington.