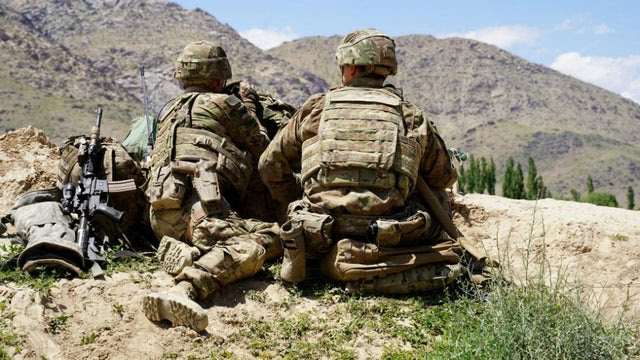 The Biden administration is preparing to move Afghan interpreters and others who assisted American military efforts to other countries while it processes applications to relocate them to the U.S., a senior administration official and two congressional sources confirmed Thursday.

The move comes amid reports that U.S. intelligence agencies assess the Afghan government could fall as soon as six months after the U.S. withdraws from the country after 20 years, leaving those who aided the U.S. in significant danger.

It also comes after mounting pressure on the Biden administration from lawmakers to evacuate Afghans who are waiting for Special Immigrant Visa (SIV) applications to be processed.

“We have identified a group of SIV applicants who have served as interpreters and translators to be relocated to another location outside of Afghanistan before we complete our military drawdown by September, in order to complete the visa application process,” the senior administration official said. “These are individuals who are already in the SIV pipeline.”

Any relocation will be done “in full compliance with U.S. consular law and in full coordination with Congress,” the official added.

The official also stressed that visa processing will continue at the U.S. Embassy in Kabul and that the administration is still working with Congress to streamline the application process, including “eliminating duplicative paperwork and adjusting requirements that do not impact national security.”

“We are planning for all contingencies, so that we are prepared for all scenarios,” the official said. “Should it become necessary, we will consider additional relocation or evacuation options.”

The New York Times first reported the plan, news of which comes a day before President Biden is set to meet with Afghan President Ashraf Ghani at the White House.

Biden told reporters Thursday he will discuss details of the plan with Ghani, including what location the Afghans will be moved to during visa processing.

“They’re going to come. We’ve already begun the process. Those who helped us are not going to be left behind,” Biden said.

It can take as long as 800 days for the State Department to process such a visa, and while the SIV program has been plagued with years-long delays for some time, the problem took on more urgency after Biden ordered a full U.S. withdrawal from Afghanistan.

Some 18,000 interpreters, security guards and Afghan embassy personnel are awaiting assistance through the program, though Secretary of State Antony Blinken told reporters Wednesday that 9,000 “are just in the beginning of the process.”

Applications have also been filed for 53,000 family members.

“We have 20,000 allies who stand in need of help, and we cannot leave them to the tender mercies of the Taliban,” Rep. Earl Blumenauer (D-Ore.) told reporters Wednesday.

It’s not clear to which countries Afghans who assisted the U.S. would be relocated while the State Department vets their application or if those countries have agreed to the U.S. plan.

Lawmakers and others have suggested the U.S. territory of Guam makes the most sense. The United States evacuated thousands of South Vietnamese refugees to Guam amid the fall of Saigon in 1975.

Sources told The Hill the relocation is planned for later this summer, just before the September deadline Biden has set for troop withdrawal.

Defense Secretary Lloyd Austin appeared to hint at the plan at a House hearing Wednesday, telling lawmakers he thought at “some point we’ll begin to evacuate some of those people soon” but deferring further comment to the State Department.

Rep. Seth Moulton (D-Mass.), who pressed Austin on the issue at the hearing, welcomed Thursday’s news but said more details were needed.

“We have not seen a specific plan yet,” Moulton said at a news conference. “It’s clearly long overdue today, so we need to start immediately, and we have not yet seen a timeline from the administration. Obviously the news this morning is very welcome news, but as I’ve said, it’s far from the last chapter of this story.”

In increasingly stark language, lawmakers from both parties and outside advocates have been warning Afghans who helped the United States face slaughter by the Taliban after the U.S. departure.

Amid the warnings, the administration said it was accelerating visa processing. But lawmakers argued that was not enough, saying too few days remain before Biden’s official deadline for withdrawal by September, let alone by the expected unofficial completion in July.

“If we leave those behind who pledged their allegiance to us and the United States of America, they will be slaughtered,” House Foreign Affairs Committee ranking member Michael McCaul (R-Texas) told reporters Wednesday, arguing the Biden administration needs to do more to speed processing.

“We need to start preparing for what the chaos is going to be once they pull out.”

At a White House briefing Wednesday, press secretary Jen Psaki acknowledged the delays but suggested Congress would be needed to streamline some of the processing requirements.

“These are individuals who have played an incredibly courageous role in helping the United States at various times over the course of our recent history: We are processing and getting people out at a record pace. We are working with Congress right now to streamline some of the requirements that slow this process down, and we’re doing the kind of extensive planning for potential evacuation should that become necessary,” she said.

“So we are continuing to evaluate what our options are there, continuing to take steps forward. And certainly, we want to take every step we can take from the federal government to treat all of these courageous individuals as they deserve.”