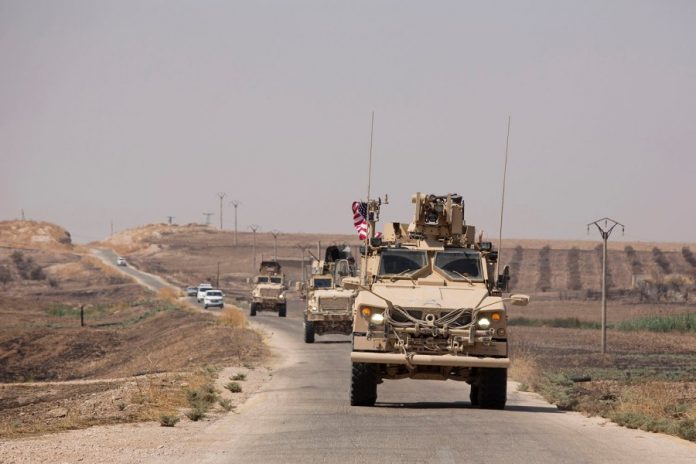 U.S. armored vehicles travel in a joint patrol of the safe zone between Syria and the Turkish border with the Tal Abyad Military Council near Tal Abyad, Syria.

AP- TAL ABYAD, Syria — Turkish and U.S. troops conducted their first joint ground patrol in northeastern Syria on Sunday as part of a planned so-called “safe zone” that Ankara has been pressing for in the volatile region.

Turkey hopes the buffer zone, which it says should be at least 19 miles deep, will keep Syrian Kurdish fighters, considered a threat by Turkey but U.S. allies in the fight against the Islamic State group, away from its border.

Associated Press journalists in the town of Tal Abyad saw about a dozen Turkish armored vehicles with the country’s red flag standing along the border after crossing into Syria, and American vehicles about a mile away waiting. The two sides then came together in a joint patrol with American vehicles leading the convoy.

At least two helicopters hovered overhead. The Turkish Defense Ministry confirmed the start of the joint patrols and said unmanned aerial vehicles were also being used.

Washington has in the last years frequently found itself trying to forestall violence between its NATO ally Turkey and the Kurdish fighters it partnered with along the border to clear of ISIS militants.

An initial agreement between Washington and Ankara last month averted threats of a Turkish attack. But details of the deal are still being worked out in separate talks with Ankara and the Kurdish-led forces in Syria known as the Syrian Democratic Forces, or SDF.

Turkey, which has carried out several incursions into Syria in the course of the country’s civil war in an effort to curb the expanding influence of the Kurdish forces, carried out joint patrols with U.S. troops in the northern town of Manbij last year.

Sunday’s joint patrol is the first one taking place east of the Euphrates River, where U.S. troops have more presence, and as part of the safe zone that is being set up.

Anadolu Agency said six Turkish armored vehicles crossed into Syria on Sunday from the border town of Akcakale, opposite from Syria’s Tal Abyad, and joined U.S. vehicles for their first joint patrol of an area east of the Euphrates river.

AP reporters in Tal Abyad said the patrol was headed to a Kurdish-controlled base apparently to inspect it, apparently to ensure that trenches and sand berms had been removed.

U.S. troops had inspected the base on Saturday during patrols with the SDF during which some of the berms Turkey had complained about were removed.

For Turkey, a “safe zone” is important because it is hoping some of the Syrian refugees it has been hosting for years could be resettled there, although it is not clear how that would work.

On Thursday, Turkish President Recep Tayyip Erdogan warned that Turkey could “open its gates” and allow Syrian refugees in the country to move toward Western countries if a safe zone is not created and Turkey is left to shoulder the refugee burden alone. Turkey hosts 3.6 million refugees from Syria.

Rather than calling it a safe zone, Washington and the Kurdish-led forces have said a “security mechanism” is taking shape to diffuse tensions in northeastern Syria.