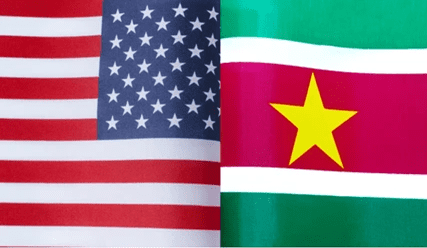 The Biden administration has congratulated the government of Suriname as the Caribbean Community (CARICOM) country celebrated its Independence Day.

“On behalf of the government and the people of the United States of America, I congratulate the people of Suriname on your Independence Day,” said US Secretary of State Antony J. Blinken in a statement on Friday.

“Our two countries share strong, educational, historic, economic and cultural ties, and we look forward to continuing our work together to strengthen commercial ties, address the climate crisis, promote accountability in governance, cooperate in the health sector, bolster human rights, and encourage stability in the region,” he added.

Blinken said Washington and Paramaribo hope to expand cooperative opportunities in the security and defence arena to jointly fight illicit activity and expand and professionalize the security forces.

He also said the United States and Suriname celebrate the people-to-people professional exchange programs that “strengthen the bonds of friendship between our citizens and look forward to more opportunities in the year ahead.

“As we work to make continued progress towards challenges such as climate change in the coming year, including through the US-Caribbean Partnership to Address the Climate Crisis (PACC 2030), the United States will remain a committed partner,” Blinken assured.

“Our shared values of democracy and resilience will continue to be cornerstones for our shared objectives,” he added.

Considered a culturally Caribbean country, Suriname is bordered by the Atlantic Ocean to the north, French Guiana to the east, Guyana to the west and Brazil to the south.

At just under 64,000 square miles, it is the smallest sovereign state in South America but also regarded as one of the most ethnically diverse.

In 1954, Suriname became one of the constituent countries of the Kingdom of the Netherlands.

On November 25, 1975, it left the Kingdom to become an independent state.