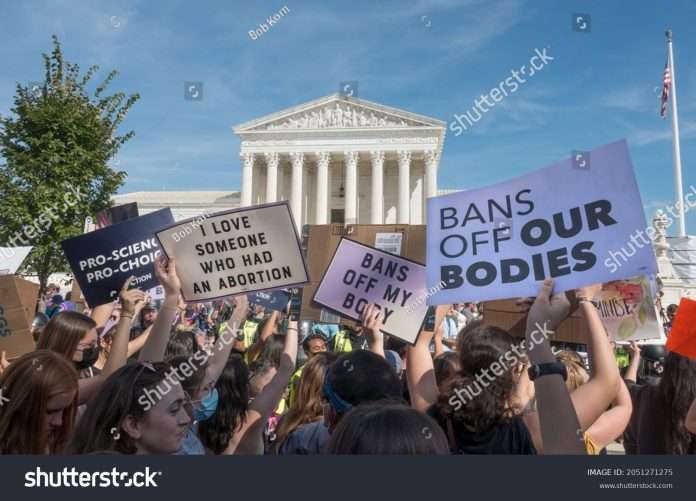 - Advertisement -
by Sarakshi Rai
THE HILL

The Supreme Court’s decision striking down the landmark 1973 Roe v. Wade ruling will leave decisions over how to regulate abortion to the 50 states.

In practice, that is likely to dramatically change the legal landscape for obtaining an abortion across the country, creating a patchwork of laws from state to state.

“Those who have struggled in the past are going to be forced into possibly untenable situations to travel great distances or could be forced to carry an unwanted pregnancy to term,” said Bethany Van Kampen, a senior policy advisor for Ipas, an abortion rights advocacy group.

The pro-abortion rights Guttmacher Institute estimates that 33 million U.S. women of child-bearing ages live in states that have laws on the books or set to be implemented that would ban or heavily restrict access to abortion.

Here’s a look at the tapestry of state laws likely to quickly come into place.

Twenty-two states have so-called trigger laws or amendments to their state constitutions that would ban abortion as quickly as possible after a Supreme Court ruling, according to the Guttmacher Institute.

Georgia, Idaho, Iowa, Michigan, South Carolina, Texas, West Virginia, Alabama and Ohio also have laws that would ban abortion, but they would not go into effect immediately.

Some of the states that have an immediate trigger ban on abortions once Roe is overturned, like Arkansas, Mississippi and Oklahoma, also have pre-Roe abortions bans in place that are not currently enforced because of the 1973 ruling.

Pre-Roe bans, according to Guttmacher, are laws enacted before 1973 that were never removed.

Other states with pre-Roe bans include Wisconsin and North Carolina.

States with bans on early-term abortions

A number of states have laws that are not currently being enforced that would ban abortion between six to eight weeks after a pregnancy begins.

Alabama is one of those states that would not allow abortions from the moment of conception except if the person’s life is in danger.

Georgia, Kentucky, Louisiana, Mississippi and Ohio would not allow abortions after six weeks, while Missouri has laws in place that would ban abortions after eight weeks unless the person’s life is endangered.


Texas banned virtually all abortions after six weeks. It went into effect in September after the Supreme Court did not move to block it.

Oklahoma has the strictest anti-abortion measure in the U.S. Just weeks after the Supreme Court draft ruling overturning Roe v. Wade was leaked at the beginning of May, Oklahoma Gov. Kevin Stitt (R) signed a bill that banned abortion at conception. The law also prohibits physicians from performing abortions at any point in a pregnancy, unless it is necessary to save the pregnant person’s life.

Florida Gov. Ron DeSantis (R) signed into law a 15-week abortion ban in April, which will go into effect on July 1. Like the Mississippi law at issue in the Supreme Court case, the Florida law will ban the procedure after 15 weeks of pregnancy and doesn’t include exemptions for rape, incest or human trafficking.

However, the law does stipulate several exceptions, including cases in which a fatal abnormality is found on a fetus or an abortion is needed to save the life or prevent serious injury to the pregnant person.