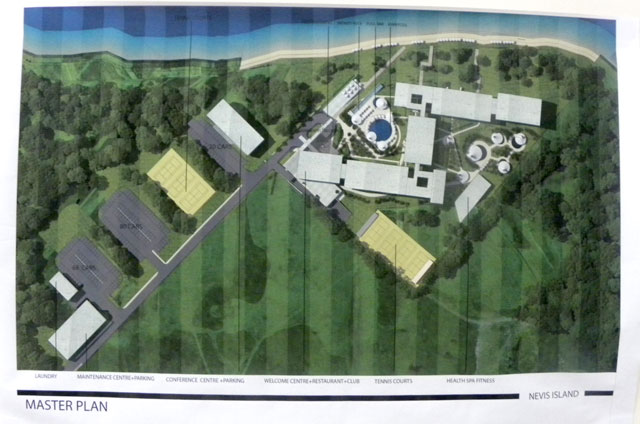 A public hearing was held last Thursday to discuss the development of a new branded international hotel valued at US$160,000,000 will open in Nevis in about four years according to Dr. Cardell “Bal” Rawlins, one of the local directors. The hotel, a five-star facility with 150 rooms with the majority being 900-square-foot  each, will be built on 13.5 acres in Potworks Nevis.

Local directors Morrice Tyrell and Rawlins, along with their North American partners will bring the project to fruition.

The public hearing was part of the Environmental Impact Assessment (EIA) on the project held at the Franklyn Browne Community Centre on Thursday. In attendance were hoteliers, members of the Nevis Historic and Conservation Society, Government ministers, residents in the St. James area and real estate agents.

According to Rawlins, The Northern Pointe Resort Development project has been in planning for over two years and has already secured funding. It will join three other hotel developments in the St James area, Candy Resort in Liburd Hill, Oasis in Potworks, and the  Butler Estate Resort and Residence  in Butlers.

According to statistics given during the public hearing, since 2011 eleven hotel projects have been proposed in Nevis, but none have ever reached the stage of breaking ground .

Rawlings told The Observer they will soon begin phase one of the project and construction will begin in mid-2017. Rawlins said that since the project has its funding, unlike other hotels that were begun on Nevis and had to stop, Northern Pointe Resort will not fall into that category.

“We are not depending on the Citizenship by Investment Programme,” Rawlins explained. “We already have the financing. This is a real foreign direct investment where our financing is being provided by an Illinois bank in the US. We have already secured a US $160 million loan. It will be an international brand it will not be free standing.”

Rawlins said the hotel will be an international brand but did not reveal its name.

One concern voiced at the meeting was the massive amount of electricity the hotel is projected to use and the impact it will have on the Nevlec and the rest of the island. When in operation, the hotel is estimated to need 9 Kilowatts per day of electricity. The Minister in charge of Electricity Hon. Alexis Jeffers, who was in attendance at the hearing, said Nevlec is purchasing two generators that will be able to keep up with the electricity supply and demand on the island.

Rawlins noted that after construction begins within the first half of 2017, construction will take 30 months to complete. He noted that project has been contracted to a company from New Jersey and a local contractor will be subcontracted.

“The next time I will see you all will be at the ground breaking,” Rawlins told the attendees.