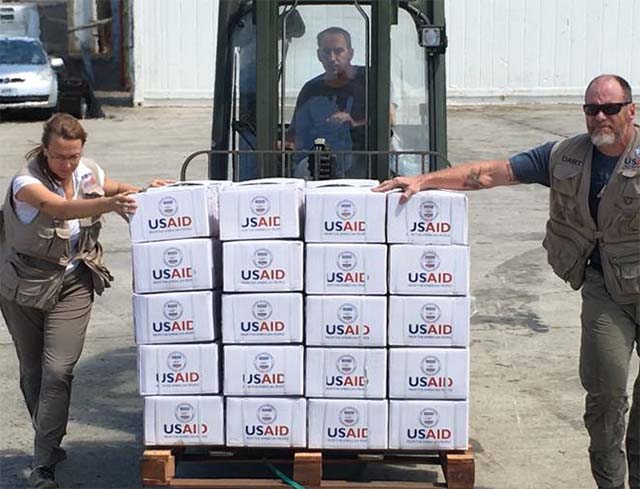 About 400 families in St. Kitts and Nevis were the beneficiaries of help provided by the US Government through its United States Agency for International Development’s Office of U.S. Foreign Disaster Assistance (USAID/OFDA).

Carl Herbert National Disaster Coordinator of the National Emergency Management Agency (NEMA) in an interview with the Observer indicated that the Federation were the beneficiaries of several boxes of Tarpualins that were distributed throughout the federation.

“We received several boxes of tarpaulins from the USAID office of foreign disaster assistance in response to several victims of Hurricanes Irma and Maria.”

He added that the plastic tarpaulins were distributed to over 300 families to assist with damaged roofs around the federation.

“We had over 300 persons receiving assistance with the tarpaulins donated by USAID. They went to various areas on St. Kitts and Nevis but because of how the storms passed with Maria passing to the south of us, quite a bit of roof damages took place on the western side of the country.”

“We are most grateful to USAID for continuing to be a very reliable partner and have assisted us again in the time of need as they did in years gone by when we were affected by hurricanes in the past, so we are extremely grateful for their contribution to our country.”

Fough then explained how that monies was used to assist in Hurricane relief efforts.

“What we used it for was, we got some supplies from Red Cross and it assisted us with the transportation from the Airport to our areas of distribution and it also assisted us in purchasing some needed supplies such as beds, pillows, sheets for persons.”

She continued, “There were persons with leaks and who did not have a bed after that and could not afford to get one, so we worked with them in that area. Some persons who had infants needed items for food so we used it.”

It was announced last week that the U.S. Government has provided nearly $18.7 million in humanitarian assistance to Caribbean countries devastated by hurricanes Irma, Jose, and Maria through the United States Agency for International Development’s Office of U.S. Foreign Disaster Assistance (USAID/OFDA) with St. Kitts and Nevis among those named.

Specifically, USAID has contributed an additional $3.25 million to the Dominica relief and recovery response, supporting the provision of critical health, livelihoods, shelter, and water, sanitation, and hygiene assistance to hurricane-affected households throughout the island, with the help of international humanitarian partner organizations.

Over the course of the response, USAID has to date airlifted a total of 162 metric tons of relief items to five hurricane-affected countries: Antigua and Barbuda, the Bahamas, Dominica, St. Kitts and Nevis, and St. Maarten. An on-the-ground USAID team continues to monitor the humanitarian response, support response coordination at Dominica’s Emergency Operations Center, and implement and coordinate early recovery activities in the wider region.