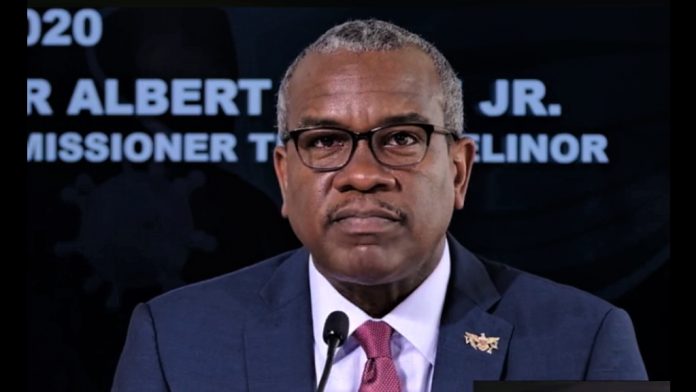 Violent crime in the US Virgin Islands appears to be flourishing despite the coronavirus lockdown measures taken in the American territory.

Governor Albert Bryan, during his COVID-19 update today, condemned these criminals who he said are not willing to participate in the territory’s growing job market since they have grown accustomed to making money from illegal activity.

“The criminal element has not been deterred by this pandemic at all and I wish I could say all the violence is attributable to high levels of unemployment in our community and the desperation related to folks struggling to feed their families,” Bryan Jr said

“At least then, we would now know how to focus our resources to a real solution but that is far from the truth. The fact is, some of our people believe it is more advantageous for them to earn a living by peddling guns and drugs in our community.”

The Governor said a more disturbing trend is that islanders are turning a blind eye to these usually young offenders since they believe crime will not affect them.

But, Bryan Jr noted that violence tends to overflow and people only become concerned when crime reaches their doorstep.

He made an impassionate plea to all Virgin Islanders to participate in efforts to make the territory a safe place.

“Their reckless behaviour endangers us all. So if you know something, say something.”

Bryan Jr announced the USVI Government will place its full support behind the establishment of an Office of Gun Prevention, which is a project proposed by Senator Myron Jackson.

The office will be community-based and its projects are intended to disrupt violence before it spills over into surrounding communities.

Bryan Jr said past administrations have not utilized community-based approaches to battle crime.

He also announced the reactivation of a shot spotter system to track shootings.

The system will work in partnership with a territory-wide CCTV network, which comes on stream later this year.

But the Governor said all these systems will require communities to be involved and report criminal activity.

In the Hospital Ground, St Thomas district, several individuals were arrested in connection with homicides and other gun crimes.

There is a US$25,000 reward for persons involved in a recent shooting in the community.

Arrests also took place for a shooting in St Croix where two women were injured.

Velinor said some of the people arrested will face federal charges.

“We don’t believe that it’s okay for people to live through a barrage of gunfire. It is so important to us to put those individuals, who are really impacting our community very adversely, behind bars.” Velinor stated as he stressed the need for law enforcement and communities to collaborate to stop the carnage.