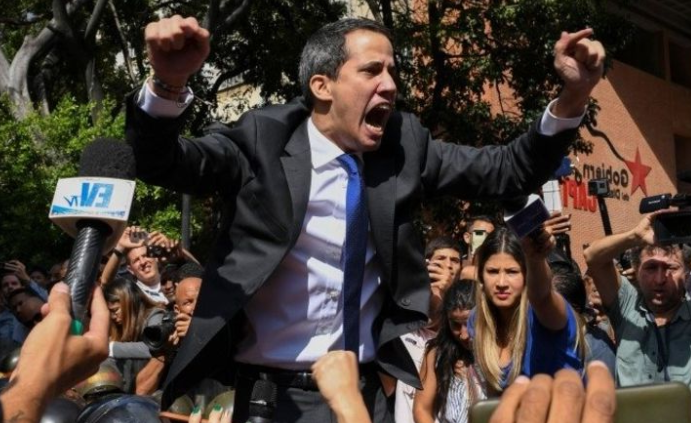 There have been chaotic scenes at Venezuela’s National Assembly, with opposition leader Juan Guaidó gaining access to the legislative building after a tense stand-off with police.

National Guards in riot gear had formed a cordon around the building, but Mr Guaidó and another 100 opposition lawmakers broke through it.

The move comes two days after Mr Guaidó was prevented from attending a vote to re-elect him as Speaker.

He called it a “parliamentary coup”.

On Tuesday Mr Guaidó arrived at the National Assembly building in a convoy of cars and busses carrying 100 lawmakers who back his re-election as Speaker.

They were let through a number of checkpoints but not through the cordon of riot police surrounding the building. A tense stand-off ensued.

About 30 minutes, amid shouts of “this is not a military barracks” and “the people rule, not the military”, Mr Guaidó and his supporters pushed their way past the guards.

Mr Guaidó tweeted footage of the moment they forced their way into the building.

Mr Guaidó sat down in the Speaker’s chair. He and his supporters sang the national anthem before he was sworn in as Speaker.

A power cut forced them to use the flashlights on their mobile phones.

How did it come to this?

The melee follows similar scenes on Sunday when Mr Guaidó and a number of opposition lawmakers were successfully barred from entering the building.

In his absence, dissident opposition lawmaker Luis Parra was elected Speaker. But National Assembly members backing Mr Guaidó held a rival vote outside the chamber, re-electing him as Speaker.

Why does it matter who’s Speaker?

Under the Venezuelan constitution, lawmakers elect a Speaker for a one-year term on 5 January. Opposition politician Juan Guaidó was elected to the post last year. A couple of weeks later, he jumped into the international limelight when he declared himself interim president of Venezuela.

Mr Guaidó argued that because the 2018 presidential election that returned President Nicolás Maduro to power had been widely been denounced as rigged, the presidency was vacant.

He invoked a paragraph in the constitution which states that in such cases, the National Assembly Speaker should take over power.

More than 50 countries recognised him as the legitimate leader of Venezuela. However, Mr Maduro, who enjoys the support of the Venezuelan military, has remained in power.

Mr Maduro’s government and the opposition-controlled National Assembly have been at loggerheads for years. But as Mr Guaidó’s claim to the interim presidency rests on his position as Speaker, this election took on a much greater significance than in previous years.

Opposition politicians accused the government of offering lawmakers financial incentives to vote against him – an allegation the presidency has denied.

What was the outcome?

Ahead of the vote, Mr Guaidó said he was confident of having enough support to be re-elected. But on Sunday he and other lawmakers were prevented from entering the National Assembly by the National Guard.

Footage showed Mr Guaidó attempting to jump the railing surrounding the building and being pushed back by police with shields.

Meanwhile, inside the chamber, there were chaotic scenes as government supporters clamoured for the election to go ahead regardless.

Eventually, an election was held despite the fact that there were not enough lawmakers for a quorum.

Luis Parra, a former ally of Mr Guaidó who was expelled from the Justice First opposition party over corruption allegations, was chosen as Speaker by pro-government lawmakers and a number of dissident opposition politicians in a show of hands.

Mr Guaidó argued that the election was illegitimate and convened opposition lawmakers to a vote at the headquarters of a newspaper. Their tally said 100 of the National Assembly’s 167 legislators backed him.

The US, the European Union, Brazil, Canada, Colombia and many other Latin American countries welcomed Mr Guaidó’s re-election and condemned the actions of the National Guard. Russia, a firm ally of President Maduro, took the opposite stance, calling Mr Parra’s election “democratiic.”