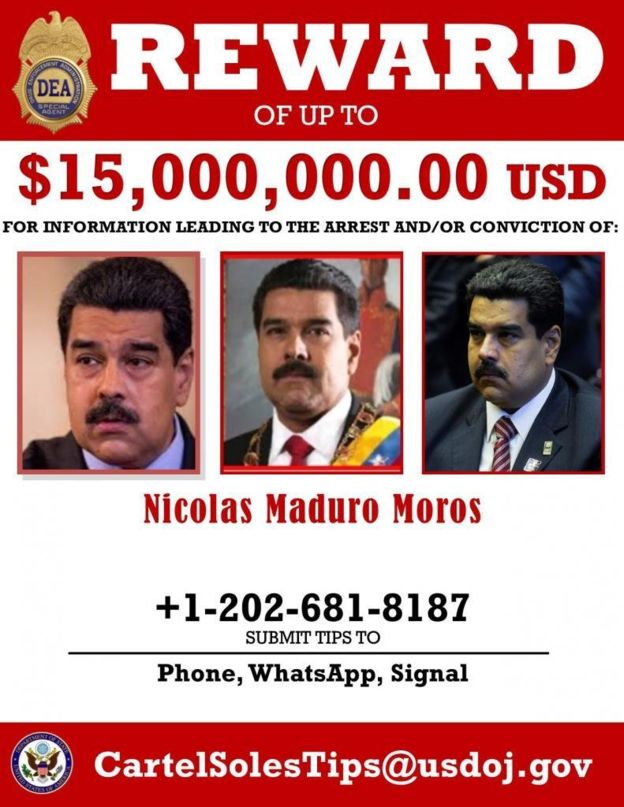 BBC– The US has charged Venezuela’s President, Nicolás Maduro, and other senior officials in the country with “narco-terrorism” and put a $15 million reward on his head.

It accused them of flooding the US with cocaine and using drugs as a weapon to undermine the health of Americans.

The charges were announced by Attorney General William Barr. A $15 million reward is being offered for information leading to Mr Maduro’s arrest.

The US move will further escalate tensions between the two nations.

Washington has long accused the Venezuelan president of leading a corrupt and brutal regime, a charge he has repeatedly rejected.

The new charges represent an escalation in the longstanding US pressure campaign on Mr Maduro, which also includes sweeping sanctions on Venezuela’s oil industry.

As well as Mr Maduro, the US charged more than a dozen top Venezuelan officials. These included the country’s defence minister and the supreme court’s chief justice.

“The Venezuelan people deserve a transparent, responsible, representative government that serves the needs of the people – and that does not…. engage in illicit narcotics trafficking,” the US state department said.

What does the US indictment say?

The charges against Mr Maduro and 14 members of his inner circle include narco-terrorism, drug trafficking, money laundering and corruption.

At a news conference announcing the indictment on Thursday, Mr Barr accused Mr Maduro of conspiring with a faction of the Colombian Farc rebel group “to flood the United States with cocaine” and “devastate American communities”.

“While the Venezuelan people suffer, this cabal… lines their pockets,” he added.

Mr Barr said the Colombian rebels had “obtained the support of the Maduro regime, who is allowing them to use Venezuela as a safe haven from which they can continue to conduct their cocaine trafficking”.

“Maduro very deliberately deployed cocaine as a weapon… to undermine the health and wellbeing of our nation,” US Attorney Geoffrey Berman said.

He accused Mr Maduro and his top aides of running a “narco-terrorism partnership with the Farc for the past 20 years”.

In a separate statement, the State Department said those named in the indictment had “violated the public trust by facilitating shipments of narcotics from Venezuela, including control over planes that leave from a Venezuelan air base”.

In response to the US charges, Venezuela’s Foreign Minister Jorge Arreaza hit out at what he called “unfounded allegations” and said they showed the “desperation” of the “Washington elite”.

“The deep frustration of the White House is a product of the peace that reigns today in Venezuela,” he said.

And in a tweet earlier on Thursday, Mr Maduro accused the US and Colombia of conspiring against Venezuela and causing widespread violence in the country.

He has long accused the US of trying to overthrow him in order to seize control of Venezuela’s oil reserves.

What’s the background to the Venezuela crisis?

Mr Maduro narrowly won a presidential election in April 2013 after the death of his mentor, President Hugo Chávez.

He was elected to a second term in May 2018 in an election seen as flawed by international observers.

Venezuela has experienced economic collapse – inflation was 800,000% last year – and 4.8m people have left the country.

Mr Guaidó has accused President Maduro of being unfit for office. He has won the support of many in the country as well as US and EU leaders.

But Mr Maduro has remained in power and is backed the army – as well as by Russia, China and Cuba.

Americans not welcome due to virus, say Mexicans

Full article Americans not welcome due to virus, say Mexicans

Why coronavirus is a class issue in South America

Full article Why coronavirus is a class issue in South America

US overtakes China with most coronavirus cases

The grim milestone came as Donald Trump predicted the US would get back to work “pretty quickly”.

How to keep 2m social distancing

How do you cope in a flatshare?

Quiz of the week: What do you remember about Kenny Rogers?

What are you doing this weekend?

How safe is takeaway food and grocery shopping?

How you can stop viral misinformation

What are ventilators and how do they work?

What help will self-employed people get?

Elsewhere on the BBC

Stream all episodes of series 1 & 2