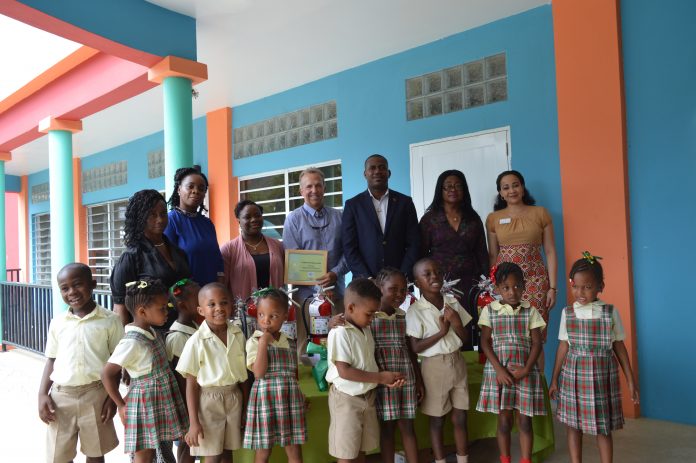 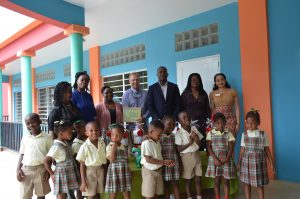 BASSETERRE, St. Kitts – The Victoria Road Preschool was the recipient of several fire safety equipment, including fire extinguishers and smoke detectors, from the Christophe Harbour Foundation, which is on a mission to safeguard all preschoolers in St. Kitts and Nevis.

Speaking at the brief handing over ceremony on May 10, the Honourable Shawn Richards, in his capacity as minister of youth and education, said he is delighted that Christophe Harbour has taken the initiative to provide the equipment not just to the Victoria Road Preschool, but to all of the preschools in St. Kitts and Nevis, both public and private.

“For an organization such as Christophe Harbour to come forth and to give not just to government schools, but also to private schools, I think it is something highly deserving of our commendations,” said the minister. “Christophe Harbour, as a private entity, has of course recognized that is has a corporate social responsibility to the people here in St. Kitts and Nevis and that is exactly why we are here this afternoon.”

Minister Richards said that the preschoolers are classified as being some of the most vulnerable persons in St. Kitts and Nevis and that ensuring their safety is important.

“Fire as we know can destroy a building within a few minutes and during the process we can also have a loss of lives,” he said. “By having this fire safety equipment, I think we are being placed in a much better position to be able to respond to any cases of fire that we may have in any of our preschools here in the federation.”

The minister added that it is noteworthy that it is not just fire extinguishers, which are being given, but also smoke detectors.

“Sometimes you engage children, your mind is elsewhere and so it is only by hearing the smoke alarm that you are alerted to the fact that there is smoke, and as we say locally ‘where there is smoke normally there is fire’ and so we are able to respond accordingly,” he said. The minister added that preschoolers, because of their physical development, would not be able to respond as fast as adults and therefore, it is imperative that teachers educate the children on fire safety.

The minister stated that the equipment will go a long way in ensuring that all of the preschools come up to standard.

The handing over of equipment is part of a larger initiative by the Christophe Harbour Foundation, which is working closely with the Early Childhood Development Unit to supply fire extinguishers and safety equipment to all the preschools in St. Kitts and Nevis.