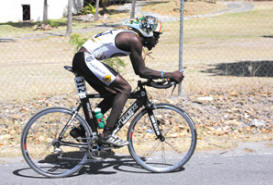 Reggie Douglas and Kristina Stoney were in great form once again on Sunday June 1, as they competed in the Boardwalk Triathlon in Phillipsburg, Dutch St. Maarten, alongside teammates Miranda Fellows and Federation President Winston Crooke.

With a field of 50 athletes vying for points for the Netherlands Antilles championships, it was sure to be a tough competition.

Reggie and Kristina were on a high from their wins in Tobago last weekend, with the Nevis team ranks swelled by the prescence of Miranda, who won in Barbados recently. The boardwalk proved to be an ideal setting for the race and the athletes lined up in preparation for the two lap swim course.Reggie exited in 6th place and with local favourite Dick Lutteckes a few seconds ahead, this race was definitely on. Miranda was having a good swim exiting some two minutes before an ever-improving Kristina and more than 4 mins ahead of local favourite Terry DeWitt.

Out on the challenging bike course it would be a matter of pure bike speed. To further complicate things the heavens opened and the resulting shower made the roads like an ice rink and athletes were forced to be conservative. Even so Terry fell once as did Miranda. Kristina had two hard tumbles, one which was on her head, cracking the helmet she received as a birthday present only a week before.

The men were also having difficulties in the slippery conditions and were not assisted by some very careless motorists. First in off the bike was Dick Luttekes followed by Jessie Vosa and Nevis’s Reggie Douglas. Dick had beaten Reggie in Anguilla recently but knew Reggie was looking for the rematch, so he headed out on the run determined to take advantage of his 2 minute lead. Reggie had other plans and quickly let everyone know that 2 minutes was not going to be enough to keep him off, passing Jessie very quickly. Reggie then bore down on the hard charging Dick, by the turn around to start lap two of the four lap course, Reggie was really cooking, stepping up the pressure stride by stride, and by lap 3 Dick had decided enough was enough, bailing out to leave Reggie to romp home unchallenged to take his second win in a week in a time of 2:05:13.

Kristina was flying on the bike despite her falls, passing Miranda and all of the other women ahead of her to came in with a good lead off the bike to start the run.

Bloodied but not in the least cowed, Kristina set off on the run course with a determined gait. Terry DeWitt was also starting the run with more than a little steel in her eyes, and a determination to catch her main rival, and catch her she did; with a fine display of strength and fitness Terry finally caught Kristina just 100 metres from the finish line.

The two of them called on their last reserves to take this win, but it was Kristina who managed to dredge up the most, sprinting away from Terry and crossing the line to the roar and applause of the crowd in 2:31:20.

It was another perfect day for Nevis, Reggie 1st place male and Kristina 1st place female, with Miranda taking fourth overall and 1st in her age group.

Look out, other Caribbean islands – Nevis is kicking butt and taking names.