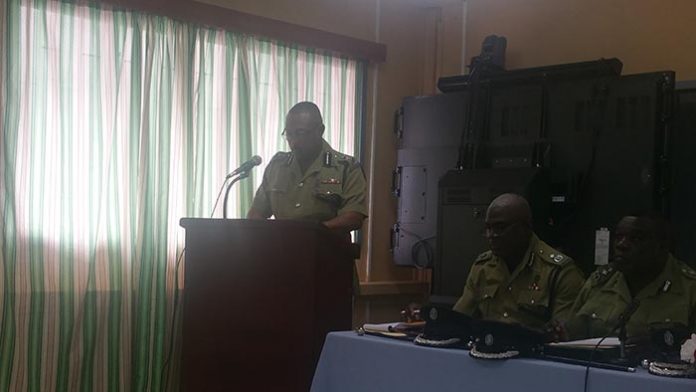 Robberies shot up but violent crimes were down in the Federation during 2017, something welcomed with relief on one hand but perplexing for the Royal St. Christopher and Nevis Police Force (RSCNPF) on the other.

Speaking at a Police Press Conference Commissioner of Police Ian Queeley stated that there were a number of “hit and misses” in 2017, but were confident that if the police persist and stick to their crime plan they will continue to see good results

In giving an overview of crime statistics for 2017 Queeley highlighted a number of reductions in multiple violent crimes over the calendar year.

“Attempted murder decrease as well with 28 being committed in 2017 as compared to 37 in 2016 down by 24 percent. There was also significant decrease in cases of wounding with intent with the use of firearms and a slight decrease of two percent in sexual related crimes and break ins,” Queeley Highlighted.

The Commissioner also stated that in terms of firearms removed from the streets they recorded a 30 percent increase with 47 removed as compared to 36 2016\
“It is also a point to note that of those 47 firearms that were removed from the streets, 38 of those are cases where persons were made answerable. This again I say must be commendable and when we do that against the variety and calibre of weapons we took off the street.”

Queeley added that their proactive enforcement led to an increase in some areas and that is quite positive.

“The RSCNPF recorded 203 or 12 percent more crimes in 2017 however, what is a point to note 57 percent or 116 of those 203 crimes were directly related to drug operations and firearms.

“So of the 203, 57 percent were directly as a result of our enforcement efforts,” Queeley explained.

He however highlighted robberies and malicious damage as crimes that were of major concern to the police force.

“We had an increase in malicious damage with 23 crimes over the year and an increase of 26 percent in the robberies. This I must say is a great concern to us. Where the robberies are concerned these are crimes of opportunities and the number of business persons have been victims of these unscrupulous individuals in our society.”

Queeley promised however to crack down on these crime in 2018. “We plan in the coming year to focus in large measure in this area and treat it as a matter of urgency. We recognize also that persons may not be aware how to entirely secure their homes or business places and as such we will continue to offer our daily tips via the media.

“We are also encouraging persons to take advantage of the governments offer to allow them to purchase surveillance devices, alarms and other related equipment duty free to enhance security,” the Commissioner implored.

Queeley disclosed that the police set a15 percent target increase in the detection rate and reported that they did exceed that target by more than doubling that of what was achieved in 2016.

“In 2016 detection rate was 18 percent while in 2017 it was 39 percent. We continue to believe that detection is one of the best forms of prevention.”