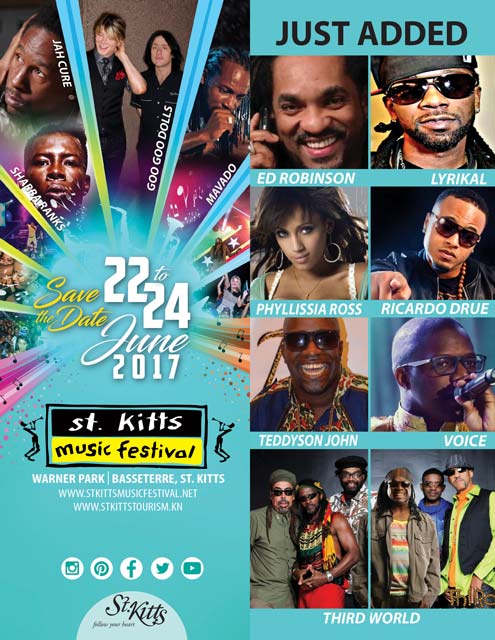 Basseterre, St. Kitts-Just days after being crowned International Soca Monarch for the second straight time in Trinidad and Tobago, soca artiste Voice, three other soca artistes, and reggae group Third World have been added to the line-up for the 2017 St. Kitts Music Festival.

A statement released by Music Festival officials revealed that Voice, popularly known for his 2016 hit “Cheers to Life”, had been added to the three-night Festival at Warner Park to be held at the end of June.

Ricardo Drue, a three time Soca Monarch of Antigua, is most famous for his tune ‘Vagabond’. He will make his second appearance while the Trinidadian LyriKal and St. Lucian Teddyson John will make their debuts

The Third World Band of Jamaica, which is engaged in a 40th year anniversary tour, will also grace the stage of the Festival adding a reggae flavor to the event. Some Third World’s hits include “Always Around”, “96 Degrees in the Shade and “Sense of Purpose.”

Making his first appearance at the festival, Ed Robinson is famous for his song “knocking on Heaven’s Door and his remake of Dennis Brown’s, “If I follow my mind”.

He has worked with Maxi Priest, Buju Banton, Snoop Dogg and Luciano.

Phyllisia Ross is a pop and R&B vocalist who made her entry on the music scene in 2009, with ‘Sunshine’. She has had collaborations with Ne Yo and Jah Cure.

Speaking exclusively with The Observer, Jonel Powell, Chairman of the Music Festival Artiste Selection Sub-Committee, said the selection indicated what they were trying to do with the St. Kitts Music Festival to bring artises from a variety of backgrounds. He added, “We try to get somebody for everybody.”

With four soca artiste revealed in this wave, Mr. Powell was asked whether a decision had been made regarding the Thursday night of the festival known as the Soca or Jump up night that was being suggested.

“The Thursday night has traditionally been the jump up night and so we are going to stick with that. The intention though is to make it into a party atmosphere and make it into a little fete,” he said.

He said artistes that are being sourced are accomplished and current.

“You have persons like Ricardo Drue, who is the reigning Groovy Soca Monarch in Antigua. You have Voice who has just won the Soca Monarch in Trinidad and Tobago and we want to bring a certain quality of acts to the Music Festival,” he said.

He stated the local acts for the Festival would be released shortly along with a few more international acts.

“We will be releasing further regional and international acts as well as the local acts. We wrapping up the contract talks and we are hoping in the very near future we would be able to present the final line-up for the St. Kitts Music Festival,” he said.

On Feb. 1, the Music Festival announced Jah Cure, Shabba Ranks, Goo Goo Dolls, and Mavado as the first set of acts for the festival that will run from June 22-24.