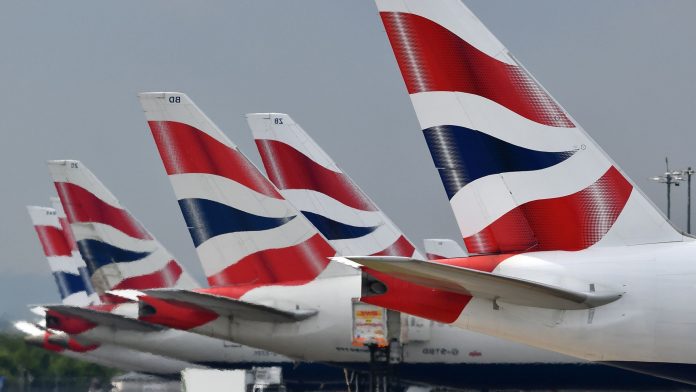 Two of the UK’s biggest airlines have announced hundreds more flight cancellations due to the coronavirus outbreak.

Ryanair is cutting its timetable by a quarter while British Airways has called off more than 400 journeys.

Both airlines cite a significant “drop in demand” caused by the Covid-19 outbreak for the drastic move.

Airlines operating in the European Union are not required to pay compensation for flight cancellations if passengers are told at least 14 days before they were due to travel.

Most of BA’s cancellations are for short-haul flights between Heathrow and Italy, France, Austria, Belgium, Germany, Ireland and Switzerland.

It has also grounded 24 flights between Heathrow and New York’s JFK airport.

A BA spokesman said: “To match reduced demand due to the continuing coronavirus issue, we are merging a number of flights between March 16 and March 28.

“We will be contacting customers on cancelled flights so we can discuss their travel options, including re-booking onto other carriers where possible, full refunds or booking with BA for a later date of travel.”

Meanwhile, Ryanair is reducing frequencies on some routes by up to 25 per cent, with its flights to and from Italy – the European country worst affected by the crisis – most impacted.

The reduced schedule will operate from March 17 until April 8 following a “significant drop in bookings” over the period, it confirmed in a statement.

The Dublin-based carrier will implement a series of additional measures to deal with the outbreak, it confirmed.

These include allocating leave or paid leave to pilots and cabin crew, working with suppliers to cut costs and freezing recruitment, promotion and pay across its network.

The airline’s CEO Michael O’Leary said it was a “time for calm” but added: “Our focus at this time is on minimising any risk to our people and our passengers.

“While we are heavily booked over the next two weeks, there has been a notable drop in forward bookings towards the end of March, into early April.

“It makes sense to selectively prune our schedule to and from those airports where travel has been most affected by the Covid-19 outbreak.

“This is a time for calm. We will make sensible cuts to our schedules over the coming weeks to reflect weaker bookings, and changing travel patterns.

“All affected customers will be advised of any schedule changes at least 14 days in advance.”


Last week, Easyjet announced its own cancellations owing to the continued spread of the deadly virus.

It said the increase in cases in northern Italy had resulted in softer demand in the region, while demand had also slowed in other European markets.

The company added that it is “too early” to determine the impact of the coronavirus outbreak on its outlook for the current year.

The International Air Transport Association (Iata) warned last month that airlines could lose around £22.7 billion ($29.3 billion) this year due to the outbreak.

The trade association, which represents airlines, has called for regulators to relax rules on take-off and departure slots amid the drop in demand.

Allocation of slots at UK airports is governed by the EU, which has a so-called “use it or lose it” rule, which means airlines must use 80% of their slots or risk losing them.

Iata claimed it would be “inappropriate” to apply the rule in summer 2020, to allow airlines to adjust their schedules in response to the “extraordinary demand developments” caused by Covid-19.

It added: “We support a partial relaxation of EU rules governing the use of airport slots use, but do not consider at the moment that a blanket relaxation for all air routes is justified.”