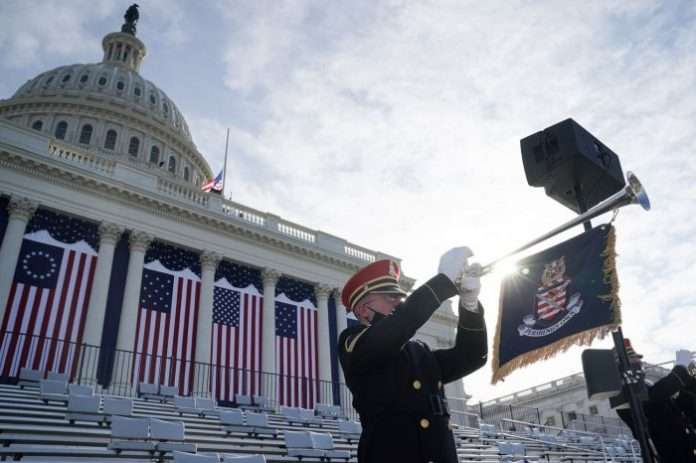 Jan. 19 (UPI) — Amid a global pandemic and the heaviest security of any inauguration in modern American history, President-elect Joe Biden is set to be sworn in Wednesday as the 46th president of the United States.

Biden is scheduled to arrive in Washington, D.C., on Tuesday evening from Delaware and will participate in an Inauguration Eve ceremony at the Lincoln Memorial to honor the 400,000 people in the United States who have died of COVID-19 to date.

At about 5:30 p.m. EST, Biden, Harris and their families will be near the reflecting pool at the memorial as about 400 lights are switched on, each representing 1,000 Americans who will have died of the pandemic.

Similar memorials will be held nationwide, including the Empire State Building in New York City and the Space Needle in Seattle and other landmarks.

On Wednesday, the ceremonies will begin at 11:15 a.m. EST with the National Anthem, sung by pop superstar Lady Gaga, and invocation by Father Leo J. O’Donovan. Those will be followed by a poetry reading and musical performance by Jennifer Lopez.

Then, Vice President-elect Kamala Harris will be sworn in by Supreme Court Justice Sonia Sotomayor and Biden at around noon EST by Supreme Court Chief Justice John Roberts on the western front of the U.S. Capitol.

After Biden repeats the presidential oath, he will deliver his inaugural address.

Due to heightened security at this year’s event, which will come exactly two weeks after radical supporters of President Donald Trump attacked the Capitol in a bid to interrupt Congress certifying Biden’s electoral victory, there will be only about 1,000 guests in attendance — not the usual tens of thousands in front of the complex.

Those in attendance will be limited mostly to members of Congress and their guests.

After his speech, Biden will move to the eastern side of the Capitol Building for what’s known as a Pass in Review, in which the new commander in chief will inspect military troops.

Then at about 2:30 p.m. EST — joined by former Presidents Barack Obama, George W. Bush and Bill Clinton — Biden will travel to Arlington National Cemetery to lay a wreath at the Tomb of the Unknown Soldier.

Finally, Biden will receive a military escort back across the Potomac River to the White House at about 3:30 p.m. EST.

The visit to Arlington is expected to last about 30 minutes to an hour.

One of the most visible traditions involved with every inauguration in recent memory, the physical parade from the Capitol to the White House along Pennsylvania Avenue, will not be a part of the events this year.

Instead, there will be a virtual parade — Parade Across America — which will include “diverse, dynamic performances” nationwide and honor Americans and front-line health workers, according to Biden’s transition team.

The National Mall, a long stretch of land between the Lincoln Memorial and U.S. Capitol complex, will be closed to the public and blocks surrounding the Capitol will be blocked off, due to threats of more violence from radical Trump supporters.

Barricades and security fencing have been put up along the grounds and Metro transit stations in the area have been closed until after the inauguration.

Singers John Legend, Bruce Springsteen Jon Bon Jovi, Demi Lovato, Justin Timberlake and others will perform as part of the events on Wednesday night. Actors Eva Longoria and Kerry Washington will also be part of the event.

The program will be broadcast on ABC, CBS, NBC, CNN, MSNBC and PBS.

Presidential inaugurations through the years