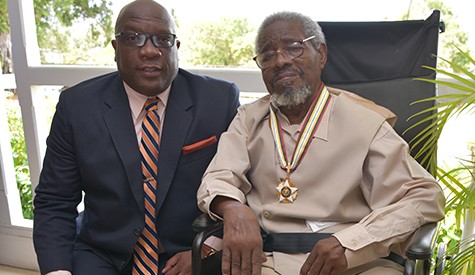 Archibald, who died last week following an illness, has been remembered by many following his contribution in education. He began his teaching career in 1951.

The prime minister of St. Kitts and Nevis, the Dr. Timothy Harris, told Parliament Wednesday that based on the many contributions made by Archibald, it had been decided to accord Archibald an official funeral.

“I want to say the cabinet of ministers has decided to accord Mr. Washington Archibald, Companion of the Star of Merit, an official funeral as a mark of respect for his contribution to the development of the federation in several areas of socio-economic endeavors. The family has consented to this further honour being bestowed on him.”

The service is planned for 2 p.m. Friday at Zion Moravian Church.

Harris said Archibald would perhaps best be remembered for his work with adult learners and people with learning disabilities.

“Mr. Washington Archibald, who only last year was invested with the national designation Companion of the Star of Merit by his Excellency, the governor-general, spent many years in the education profession,” Harris said. “From 1951 to 2009, he served as a teacher and principle at several government schools and at the St Theresa Convent School, now the Immaculate Conception Catholic School. Mr. Archibald also established, in the latter part of his educational career, his own private school, the St Kitts Business College, and he later founded and led what is now described as Project Strong. All of his life, he was devoted to the upgrading of the human capital of the citizens and residents of this our beloved country.”

The prime minister also hailed Archibald as a great citizen, not only for his work in education, but as a political commentator as well.

“Mr. Archibald played a critical role in the political life of St. Kitts and Nevis and in many respects,” Harris said. “He was not an ordinary political activist; he held alternative views with respect to the progressive development of the federation.”

Harris mentioned the alternative idea Archibald had long berfore the sugar industry was closed in 2005.

“Before the sugar industry was forced into closure in 2005, Washie long before then fanned the flames of thinking regarding the viability and sustainability of the sugar industry and, indeed, it was that passion for the[progressive]  alternative led him firstly to propose that we should be done away with sugar and develop what he then referred to as a pork industry,” Harris said. “That was never realised and now we realise that there is a high demand for pork in the country and it is certainly an area about food security which we will pay greater attention.”

He also noted that Archibald in keeping with his revolutionary approach was the one of the first individuals to propose the white gate project. “For him, this was another alternative way to bring to the people of St. Kitts developments more sustainable than those liked to the sugar industry,” Harris said.

Archibald, 83, was born May 28, 1934, in Soho Village, Basseterre. His academic accomplishments include a bachelor of arts degree in economics and history, with a minor in English literature, from the University of the West Indies (Cave Hill), and a diploma from Leeward Island Teachers’ College.

He served principal of Senior School with the mandate to transition it to the Basseterre Junior High School, which was upgraded to a high school in 1998 under the name of Washington Archibald High School.

He also was a regular contributor for this publication for two years with a regular column.