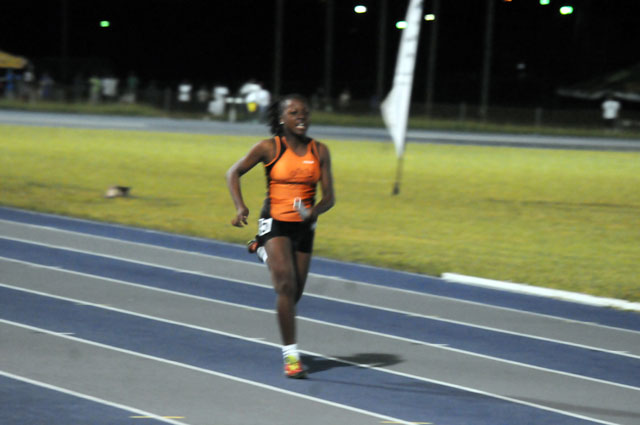 Ten learning institution as well as three track and field clubs participated in the all relay event. However only the schools were involved in the competition aspect of the meet.

On a rainy and cold Sunday afternoon, the races started off with the females 18 and over distance medley that saw the teams participating in a variety of legs. The first leg was 800m, the second 400m, a 1200m was the third and a 1600m rounded out the race. That inaugural race was won by the Charles E Mills Secondary School who dominated from beginning to end and were followed by the Ross University and the Verchilds High School.

In the very next race, the 18 + males, the fair sized crowd witnessed what could only be described as a classic between Extreme Velocity and Fast Twitch track clubs. Extreme Velocity with O’Brian ‘Straw’ Huggins running the final leg revived the baton with a comfortable 30 meter lead ahead of Leroy Ponteen of Fast Twitch.

As they made their laps around the track for the final lap Ponteen chipped away at Huggins’ lead and with 110 meters left in the race slimmed it down to mere feet.

With Ponteen breathing down his neck Huggins went into a full on sprint to try and separate from his competition but Ponteen then started his sprint about 10 meters later reacting to the race leaders actions to set up a ding dong battle for the finish.

When Huggins started to tire Ponteen found the added energy needed to catch Huggins on the line and edge him out to capture the victory.

Following the rain delay the distant medleys continued with the U16 categories in the male and female categories which was both won by CEMSS in blow outs. The U 18 male category saw the WAHS taking victory to end the medleys.

The competition then went into sprint events with the 4x200m that was dominated by the Washington Archibald High School.

In the U14 female the WAHS came from behind in the final leg following a bad baton exchange by the CEMSS team. The Cayon High School and the Immaculate Conception Catholic School despite trailing early on fought back on the final two legs to win the race in a stunning upset.

In the U-16 category the WAHS copped victories in both the male and female categories.

In the U18f WAHS was running away with the race as well as the completion as the led for most of the race but a bad hand overs gave CEMSS the opportunity to sneak pass them to capture this race and well as winning the male U-18 category.

Following the 4x200m WAHS opened a slender two gold medal lead with seven over the CEMSS who at the time had collected five heading into the final series that was the 4x100m.

In the first 4x100m the U14 female event the medal leaders ran away with a comfortable victory almost assuring victory.

In the boys U14 CEMSS didn’t field a team but WAHS failed to even place in the top three meaning CEMSS had an opportunity if they won three of the Final Four races. WAHS however completed the victory in the U-16 females when they ran away with that race.

However following that race the rains returned and brought an end to proceedings with three races remaining.

The nine gold medals by WAHS was however enough to capture the title of the first Relay Champions over the five of the CEMSS.

However up until print time the official medal standings was not available to members of the media.