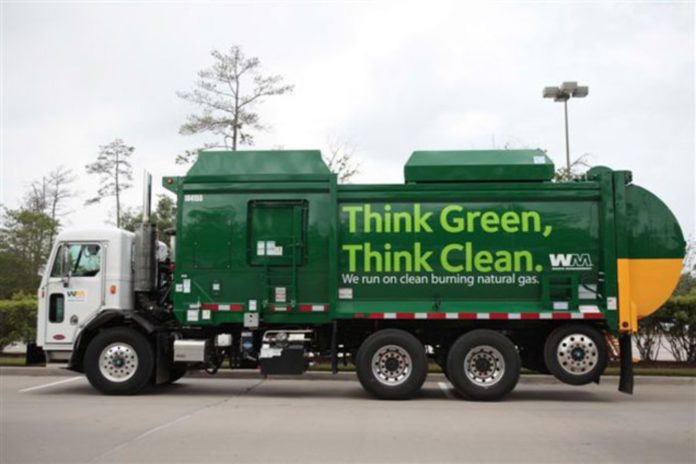 Photo: A garbage truck in Minnesota, USA, that runs on natural gas, which is said to cost about 40-50 percent less than that of gasoline or diesel fuel. (Google)

Basseterre, St. Kitts – As a means of reducing pollution in the atmosphere from the use of diesel and gasoline, thus creating a healthier environment, an alternative is being sought concerning the transportation sector.

Appearing on “Working for You” Aug. 30, Bertill Browne, director of the energy unit in the Ministry of Public Infrastructure, said that a number of countries worldwide, as well as St. Kitts and Nevis, are considering the use of alternative energy to be used in vehicles, as this will prove beneficial in the long run.

“In other countries, on a short term, we are looking at probably natural gas to replace diesel and gasoline because it is cleaner,” he said, adding that the electric vehicle industry seems to be gaining momentum.” It is a fossil fuel but it is cleaner. But, in the long term, the solution both for St. Kitts and Nevis and in the world is electrical vehicles. If you could provide renewable energy to your grid and then the vehicle gets the energy from that instead of from diesel and gasoline, then you will have renewable energy use in the transportation sector.”

He explained that although difficult, there are other short-term initiatives that many other countries are doing. “One is to keep public transport cheap and reliable to basically reduce the incentives for everybody to own a car,” he said, reiterating that the “short term move is to use natural gas in vehicles.”

Information from http://naturalgas.org/overview/uses-transportation/ states that natural gas will prove beneficial to the overall well-being of all, and has long been considered an alternative fuel for the transportation sector. It further stated that natural gas vehicles, when designed to run on natural gas alone, are among the cleanest vehicles in the world.

As is the case in the United States, the article explained that natural gas vehicles as they exist today are best suited for large fleets of vehicles that drive many miles a day. These include but are not limited to taxicabs, transit and school buses, airport shuttles, construction vehicles, garbage trucks, delivery vehicles and public works vehicles, all of which are present in St. Kitts and Nevis.